With the new season of Koffee With Karan 6 featuring some interesting pairs, the second episode of the chat show saw Ranveer Singh and Akshay Kumar coming together.  Well, obviously that has made many wonder as to the kind of connection, bond or camaraderie that the two actors share considering that they have never acted together neither do they have any kind of off screen rapport that people are aware of. On the show, we saw many revelations including a connection that these two actors share. 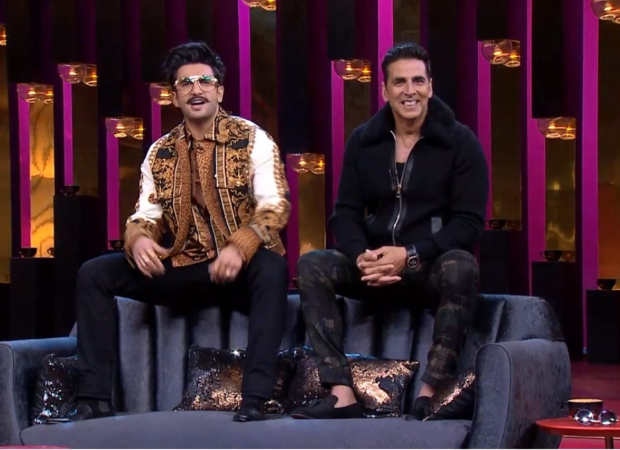 The show started off with Karan Johar introducing himself as Mama’s boy, followed by introducing two other Mama’s boys. We are talking about Akshay Kumar and Ranveer Singh, who made a dhamakedaar entry with a boom box playing ‘Bholi bhaali ladki’. While they didn’t have much of discussion when it came to films during this episode, Karan did explain why he decided to get such a unique pair of heroes together.

Well it all started off with that one picture of Ranveer Singh’s childhood when he met Akshay Kumar. The actor revealed that he had three cousins who had come down to Canada for a family vacation and had one desire – to meet Akshay Kumar. The actor was shooting in Mumbai for the film Keemat and Ranveer had visited the sets where they even saw Raveena Tandon. Ranveer described that he was practically gawking at Raveena who was shooting in a white saree and in a wet avatar. He also stated that the security guards were almost on the verge of throwing them out when Akshay spotted them and started having conversation with the kids. He also clicked pictures with them.

On the other hand, another interesting aspect that Ranveer Singh revealed was the story behind his tracksuit. Well, it was supposed to be a designer tracksuit worth Rs. 3.5 lakh that Karan Johar had gifted the Padmaavat actor. The actor apparently has been receiving such handout collection of clothes and outfits that have been passed on to him after KJo realizes that he can’t pull them off. Well, now you know where Ranveer Singh finds his quirky outfits from!!

Some interesting segments during the show included, Ranveer Singh and Akshay Kumar pretended to do a scene of being onscreen brothers with Karan Johar as the villain. Well, their melodramatic acting with the 90s twist will leave you in splits. The duo also was thrilled to have their besties which included Ranveer’s childhood buddies and Akshay’s team who works with him.

No wonder @akshaykumar is always laughing his way from the Box Office to the bank! #KoffeeWithKaran #KoffeeWithAkshay #KoffeeWithRanveer

But the most interesting was the RAPID FIRE round and besides the snappy answers, we also saw him making some slip of the tongue revelations. Well, we are talking about his forthcoming film Takht and ’83.  During the round, there were some answers, which as Karan like to describe, were rapid and had lot of fire in it. One such one was when Ranveer Singh confessed about CHEATING but not his full girlfriend, his half girlfriend.

Besides that, he went on to answer the question, whether he ever felt aroused during a narration. That’s when he unveiled a portion of Takht. His answer was, “Your movie Karan, Takht.” He further added that he felt aroused when the latter narrated an intimate scene between Aurangazeb and Heerabhai. We wonder if this was Ranveer’s way of confirming about the details of their forthcoming Takht. 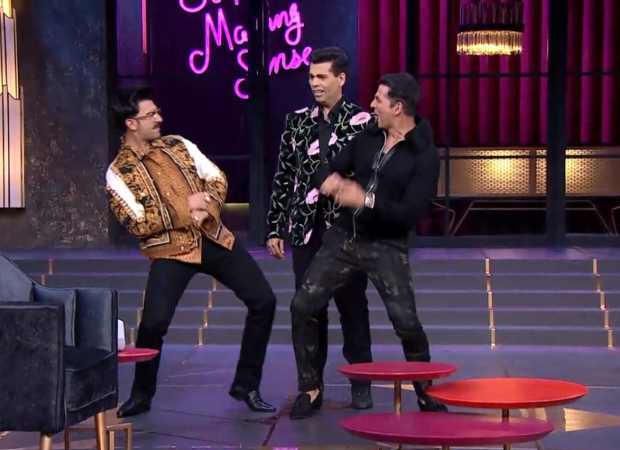 Another interesting revelation was about Kuch Kuch Hota Hai sequel. The actor maintained that he would like to have him, Alia and Deepika together in film and that would be a sequel to this Karan Johar blockbuster. He also wanted Ranbir to do the role of Salman Khan. Some other interesting comments made by Ranveer Singh included, his response to why Arjun Kapoor would leave a party. To the same, he maintained that Arjun would probably leave the party if he had a booty call. Whereas amongst the other heroes, Shah Rukh Khan would be the last one to leave and he wouldn’t go until he hugs and says goodbye to all.

On the other hand, Ranveer Singh also confirmed that he will essay the role of Vicky Kaushal’s brother. Also, when he was asked to choose a Khan he would like to share screen space with Ranveer took the name of Taimur and claimed that he wants to essay the role of his onscreen father years later. Knowing the candid nature of Ranveer, the actor also uninhibitedly confessed to running naked on the field.  Another interesting response that came from him during the show was when he was asked to name the Tinder profile intro of the actors. For Ranbir Kapoor, the actor had the most apt response. – “I have many talents outside the bedroom.” Apart from him, Ranveer gave bios to Sidharth Malhotra, Arjun Kapoor’s profiles too.

While Akshay Kumar too had an answer to every question that Karan asked, we would say that there wasn’t much fire to the same. The actor revealed that if his wife were to return the one pairing he would like to see is that of Twinkle Khanna and Aamir Khan. He also stated that amongst the other women, he finds Deepika Padukone as one of the hottest actresses.

The episode ended with the quiz round and well…. Let the winner be a secret until you catch the show!!

Also Read: Koffee With Karan 6: Shahid Kapoor and Ishaan Khatter to come together for the first time on the small screen and it is for this Karan Johar show