The sibling saga on the latest season of Koffee With Karan continues with the recent episode. For the first time ever, the Kapoor siblings, that is, Sonam, Rhea and Harshvardhan Kapoor came together on the couch. The trio’s equation has always garnered attention and one of the reasons for it are the contrasting personalities of these siblings, especially, Harsh and his sisters Sonam K Ahuja and Rhea Kapoor. Obviously, family dynamics were a part of the discussions and then they had Karan Johar hosting it who has been quite close to the family. 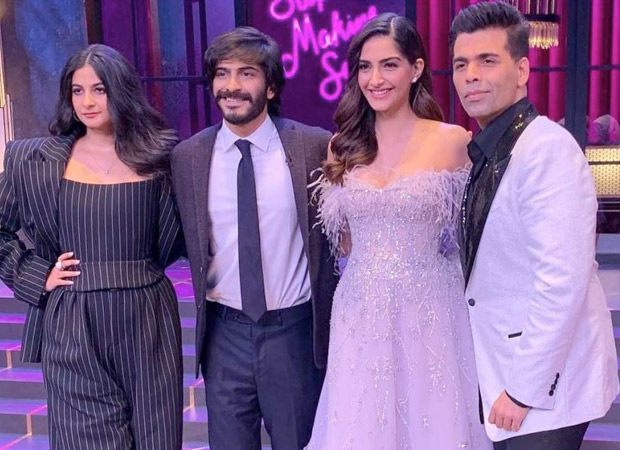 In fact, the producer – host started off the introduction by saying how Anil Kapoor was his first friend from the fraternity! And from there on, there was a small intro of all the three siblings who proceeded to the couch hand in hand. After the initial bit of dabbling around relations with each other, it was their father Anil Kapoor who was omnipresent on the couch for the first half of the episode.

From discussing their personal equation with father Anil Kapoor to speaking of what he shares with the other sibling, the three Kapoors shared some hearty moments of their lives. It was Rhea Kapoor who had a lot to say about Anil and his equation with Sonam wherein she confessed that it was the funniest she has ever seen. “They are constantly walking on eggshells around each other. They are so crazy, sensitive to each other that they are afraid of each other’s reactions,” said Rhea. She maintained that Anil sometimes asks her to send across a message to Sonam because he is afraid of her reaction. Further she went on to speak about how she shares a buddy-like relationship with her father AK, as they had like to call and Sonu is what they call their mother Sunita.

Karan Johar also spoke to about how Sonam K Ahuja often uninhibitedly shares her opinions and thoughts on social media and the actress proudly accepted that adding that she doesn’t fake it but actually believes in it. Well, another interesting topic that kept popping around now and again was that of Veere Di Wedding! Everyone knows that Veere Di Wedding that released earlier this year featured Sonam as one of the leading ladies and Rhea Kapoor was the producer.

Anil Kapoor featured in one of the segments of Koffee With Karan where he had a funny yet lovely message for his three kids. While the emotional part of the message showcased how proud this father was of his children, the other half had some interesting revelations. One of them was about Rhea Kapoor mimicking Kareena Kapoor Khan and Sonam Kapoor. As we mentioned before, Veere Di Wedding did occupy some prime focus on the show!

Coming to the mimicry, the sport that Rhea Kapoor is, she decided to mimic the conversation she had with Bebo aka Kareena Kapoor Khan before the shoot of the song ‘Tareefan’. She also mimicked her sister during the same segment but not before adding that both, her sister and Kareena Kapoor were blissfully unaware of ‘Tareefan’ lyrics when they shot for the song.

Well, another fact is that Rhea Kapoor is a non-actress in a family of actors. From her father to two of her siblings, everyone is bitten by the acting bug but not her! And the producer has an explanation for it. And guess what! It also has a Karan Johar connection. When Rhea was assisting the filmmaker’s team for Wake Up Sid [featuring Ranbir Kapoor and Konkana Sen Sharma], Rhea decided that she can’t be someone who can follow instructions. “I realized that I can’t come in between this gigantic process and be like, ‘do what you want with me.’ I am a control freak and I can’t handle it and I have no idea how these people do it.”  On the other hand, she also spoke about what her father had to say about her becoming an actress. “He was afraid that I had be like a heroine’s sister who would be lurking around. He could see through my personality,” added Rhea.

When it comes to siblings, the question of which parent loves who the most is a common question that arises and not surprisingly it was a part of this ‘Koffee’ table discussion too! While Anil seem to have no favourites and he is unapologetically honest as described by Rhea, it is Sunita Kapoor’s obsession or rather over protectiveness for Harsh that was discussed in detail. The discussion concluded with Rhea making a statement that, “Sonu would put Harsh in a pool with a float and throw us [her and Sonam] from the diving board.

But before the siblings got prepped for the much popular Rapid Fire Round, there was a small segment where we got a glimpse of their ‘girl gang’. The happening girl gang of Rhea Kapoor and her now married sister Sonam K Ahuja, had a lot to say about the Kapoor sisters! Amongst them were, chef Pooja Dhingra, co-actress Swara Bhaskar, popular designers Shehla Khan and Masaba Gupta, Entrepreneur Samyukta Nair who spoke about the sisters individually and even compared to who is badass etc.

Followed by this was the Rapid Fire Round, where the answers were rapid and tad bit of fire too! When Sonam was asked whom she does she look best on screen, the actress recalled her much talked about chemistry with Fawad Khan and post that she commented saying, “Karan sent him back,” that left the show host quite dumbstruck! While Rhea Kapoor’s rapid fire debut passed on quickly, it was Harsh who made his debut on this round and left a mark!

He accepted that Andhadhun [which originally features Ayushmann Khurrana as the lead in this unconventional Sriram Raghavan thriller], was first offered to him and he regrets rejecting it. But what made it more interesting were the answers that followed this. When he was asked who would he like to have as Leela if he was Ram to which his answer took his sisters by a surprise, he said Suhana Khan. The other answer that left them surprised was a similar question where he asked if he was Raj then he wanted Ananya Panday to be his Simran. In one of the other questions, when Harsh was asked whom would he set his sister Rhea Kapoor up with, he answered it would be Farhan Akhtar.

All the hoopla of the Rapid Fire came to an end, when the hamper was handed over to Harsh who didn’t leave a single question unanswered. Although the quiz section was eliminated, the trio in the final section were asked to call their family members and anyone who gets maximum people to answer it would win the round! And yet again Harsh won the round, with him calling his cousin Arjun Kapoor, his uncle Sanjay Kapoor and his mother Sunita Kapoor.