Kiara Advani made her deubt with Fugly and went on to be a part of several other films including M.S. Dhoni- The Untold Story. Currently, Kiara Advani is basking in the success of her big patriotic release Shershaah along with Sidharth Malhotra. The film received a very strong and positive response from critics and audience. Kiara’s performance also received several accolades and was appreciated by many. 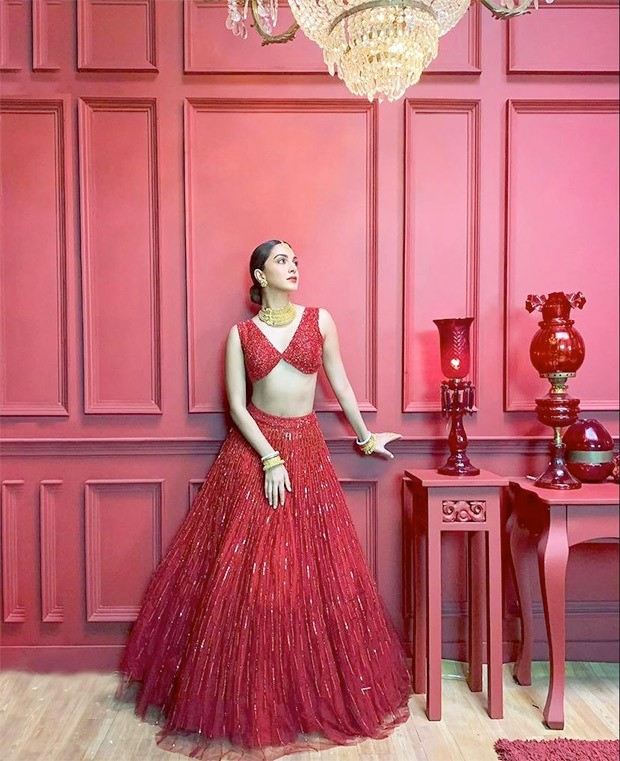 Kiara Advani looked fiery hot in a red lehenga with a statement blouse. The plunging neck blouse featured a heavy shimmer front with a small cinch. She paired it with a heavily flared, billowing skirt that had a shimmer lining. Kiara looked stunning in this red set from Geethika Kakanumilli. Kiara looked hot with shimmery makeup, a sleek hairdo, a skimpy choli and high waisted lehenga. The perfect pick for when you want to make a statement and have all the heads turning in your direction.

Kiara Advani was also seen in Indoo Ki Jawani, opposite Aditya Seal. Her upcoming projects include Bhool Bhulaiyaa 2, alongside Kartik Aaryan and Tabu. She will also be seen in Jug Jugg Jeeyo, with Anil Kapoor, Neetu Kapoor and Varun Dhawan. She has also been signed for the Shashank Khaitan’s film opposite Vicky Kaushal alongside Bhumi Pednekar.

Also Read: Janhvi Kapoor’s retro look will take you back in time