Rohit Shetty is back with another electrifying season of Khatron Ke Khiladi. The show will see some power-packed and dreadful stunts. Well-known television stars are participating in the show this season. Colors TV has been releasing several promos of the stunt show to give the fans a little glimpse of the upcoming show. 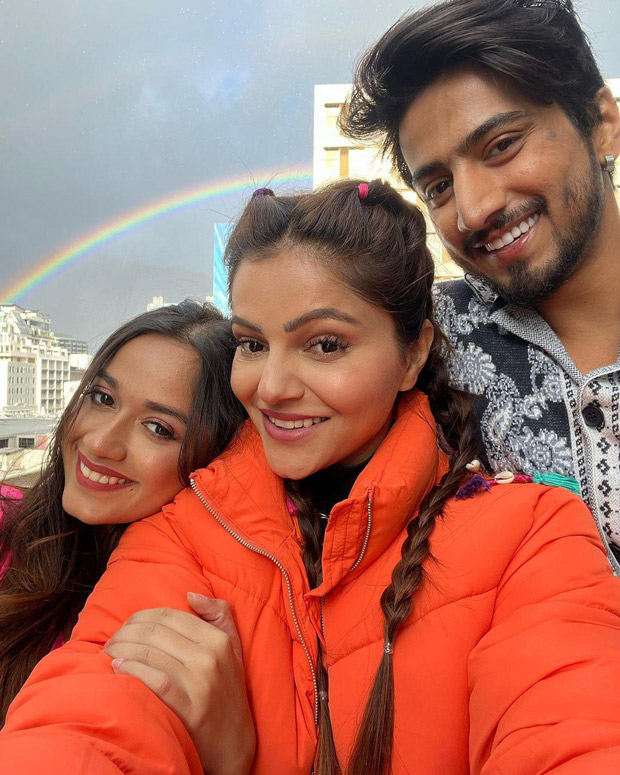 The actors taking part in the show have also been posting regularly from Cape Town where they are currently shooting for the show. Sriti Jha, Rubina Dilaik, Faisal Shaikh and many other renowned television actors are part of the show.

Recently, Rubina Dilaik took to her official Instagram handle to share a series of happy pictures with her co-contestants. Rubina, along with Jannat Zubair and Faisal Shaikh can be seen posing for a picture where all three of them look in a playful mood. The rainbow in the background make it a picturesque location. Rubina also posted a video of her with Faisal as she showed her fans the scene of a beautiful rainbow in the city.

Not just Rubina, Jannat also took to her Instagram handle to post pictures of Cape Town. She posed in front of a chopper, donning a white outfit with black boots and a stunning sling bag. While posting pictures, she wrote, “Full video of my first chopper experience will be out soon on @voot".

The shoot for Khatron Ke Khiladi season 12 has already commenced and will continue for two months until the ultimate winner of the show is announced. The show will feature stars from the television industry such as Rubina Dilaik, Sriti Jha, Shivangi Joshi, Kanika Mann, Pratik Sehajpal, Mohit Malik, Tushar Kalia, Jannat Zubair and many others. It is set to premiere every weekend from July 2 on Colors TV at 9 pm.