Hollywood actor Keanu Reeves is once again sharing his generosity and this time with his stunt team on John Wick: Chapter 4. The 57-year old actor surprised his stunt crew with individually personalized Rolex Submariner watches during a dinner in Paris on Saturday night after wrapping filming for the upcoming action film. 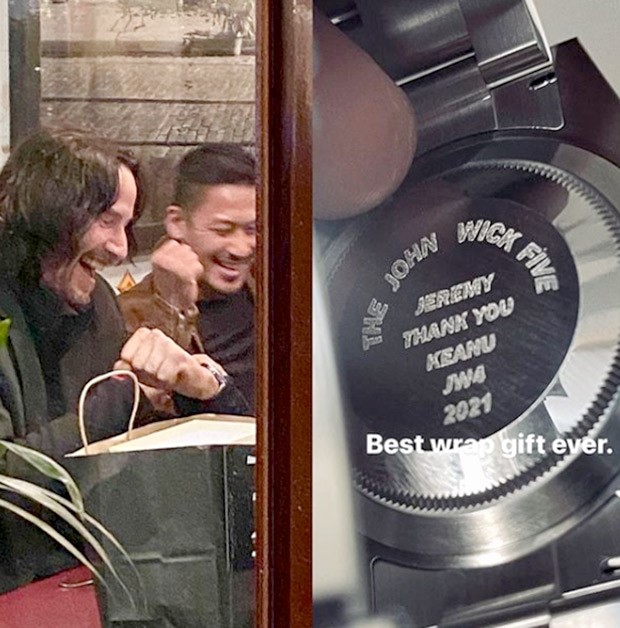 The four-man stunt crew – Bruce Concepcion, Jeremy Marinas, Dave Camarillo and Li Qiang were all gifted the watches by Reeves. The inside of each watch was engraved with personal messages to each individual from the actor. Marinas shared a look at the watches in his Instagram Stories, calling it the "best wrap gift ever" and revealing his watch read, "The John Wick Five" along with the message, "Jeremy Thank you Keanu JW4 2021." The cost of each watch is around $10,000 (Rs 7,48,390).

Concepcion also shared a photo of his Rolex on his Instagram Stories, writing, "Got that new new thank you bro KR."

Keanu Reeves has never shied away from performing sweet gestures. In July 2019, while filming Bill and Ted Face the Music, Reeves spotted a sign on the front lawn of someone's home in Louisiana, where the film was shooting, that read, "You're breathtaking.” The message was a reference to a viral moment in which Reeves said the words to the crowd at the E3 video game conference after a fan shouted the phrase at him from the audience.

Upon seeing the sign, Reeves stopped the car to have some fun with it, kneeling in the grass to write, “Stacey, You're Breathtaking!” along with his signature. Eventually, a Twitter user revealed she was the woman behind the sign, and shared a photo with Reeves to prove it.

His habit of doing down-to-earth and kind tasks for his fans frequently goes viral, like in May, when a writer recounted the time the actor bought an ice cream cone just so he could sign the receipt for a 16-year-old fan.

Along with Reeves, John Wick - Chapter 4 stars Donnie Yen, Asia Kate Dillon, Scott Adkins and more. The film is set for release on 27th May 2022.

Also Read: “I would have done any part Lana Wachowski would have given me” – says Priyanka Chopra on starring in Keanu Reeves’ The Matrix: Resurrections