Last Updated 08.02.2023 | 10:17 AM IST
feedback language
follow us on
Bollywood Hungama » News » Bollywood Features News » KBC 14: Jackie Shroff opens up about how Suniel Shetty bought tickets for his film to keep it housefull on the show

Jackie Shroff and Suniel Shetty have been a part of many films together and share a great camaraderie on and off screen. The 90s stars were discussing about their rapport even when they appeared together on the reality game show Kaun Banega Crorepati Season 14, hosted by Amitabh Bachchan. Recalling the old days, Jackie had an interesting anecdote to share about how once Suniel Shetty ended up buying half the tickets of Jackie’s film show at a theatre to ensure that it is ‘HOUSEFULL’. 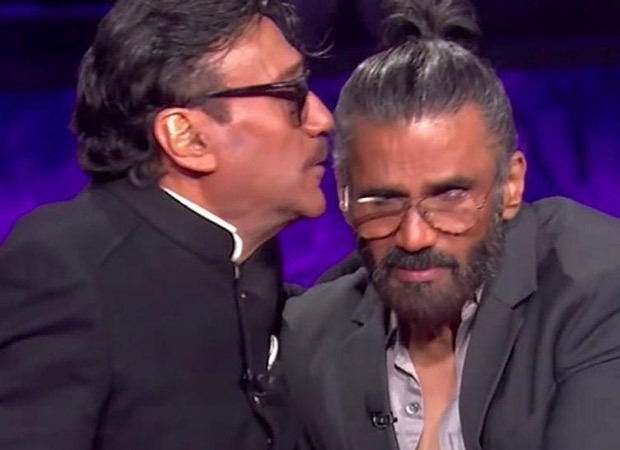 KBC 14: Jackie Shroff opens up about how Suniel Shetty bought tickets for his film to keep it housefull on the show

90s kids would be aware that the Housefull board was a sign of how popular the movie is and was considered to be quite prestigious then. However, when one of the films of Jackie released, the film was only half way to be housefull in a nearby theatre. Despite that, Suniel Shetty bought all the remaining tickets because he didn’t want a Jackie Shroff film to be anything less than Housefull.

Recalling the incident on the show, Jackie had said, “Ek picture meri release huyi thi aur humlog inke hotel mein pahuch jaate the. Toh waha humlog baithe the upar aur kisine aake bola, 'Jackie woh teri picture release huyi uski tickete abhi bhi baki hai, biki nahi'. Toh yeh bole, 'Ticket kharidle, jitne bache hai kharid lo. Full honi chahiye dada ki picture'. Toh unhone saari tickete kharid lee. Kaun kiske liye khariddta hai? Woh jaake meri picture ki ticket, aadhi kam thi, aadhi tickete kharid lee. (A film was mine was released and all of us friends were chilling at this hotel. While we were sitting and chit-chatting, someone told me, ‘Jackie, the tickets to your recently released film are still remaining and have not been sold out. That’s when he said, ‘Buy all the remaining tickets. Dada’s picture should be housefull’. And he bought all those tickets. Who does that for anyone? It was my film and only half the seats were booked and he purchased all the rest of it).

On the show Jackie Shroff also went on to express his gratitude towards his Hulchul co-star. Speaking of Bollywood, while both the actors are currently choosing fewer roles, Jackie Shroff is gearing up for an interesting release soon. He is expected to play the antagonist in the forthcoming horror comedy Phone Bhoot that also stars Katrina Kaif, Ishaan Khatter, and Siddhant Chaturvedi in lead roles.