Kartik Aaryan has wrapped the 'epic climax' shoot of his forthcoming film, Shehzada. The actor claims it is his most commercial film ever. The film is Hindi remake of Allu Arjun starrer Ala Vaikunthapurramuloo. The actor took to Instagram to share that they have completed the climax shoot. 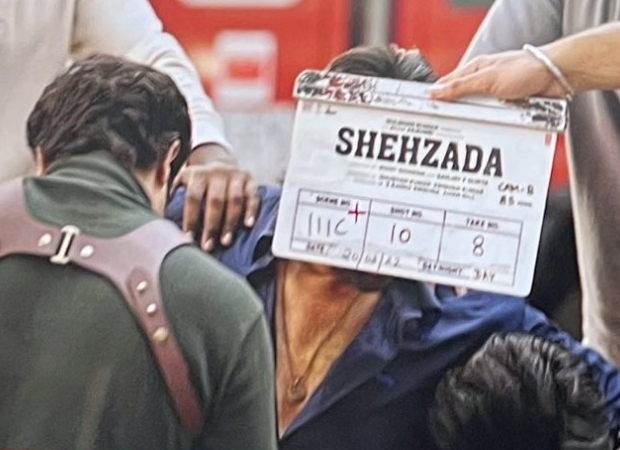 Hiding his face behind the clapboard and surrounded by crew members, the actor wrote on Sunday, "Insomniac like me slept for Ten hrs after the Epic Climax that we shot for #Shehzada filled with Action which I have done for the first time. One of the most difficult, hectic and again a new zone for me. Just can’t wait for you guys to see it #10thFeb2023 Meri sabse Commercial picture aa rahi hai."

In an  earlier exclusive chat with Bollywood Hungama, Kartik Aaryan talked about the film’s budget has been increased and the makers are planning on making it a big film. The actor revealed, “With Shehzada, I am really excited for [the film]. Release date uski February 10th ho gayi hai aur woh Valentine’s week mein aane waali hai which is a great date to have.  We were really happy. Film bhi abhi, woh aur budget badha rahe hai aur film ko aur bada bana rahe hain.  Usmein thodi aur cheezein uplift ho rahi hain. I think they need aur time for that so woh time aur kheech raha hai which is for the betterment of the film. Joh chunk bacha hai usko aur bhi jyada [bada banana hai]. Rohit is a great director. I’ve really bonded well with him. I really looking forward to the release of Shehzada also now.”

Luka Chuppi actors Kartik Aaryan and Kriti Sanon are all set to reunite Shehzada, directed by Rohit Dhawan. The film, which was expected to release around the festive season in November, has now been rescheduled to a Valentines season release. The film will release on February 10, 2023.

ALSO READ: Kartik Aaryan completes 11 years in Bollywood; thanks people 'who went for the craft instead of lineage'