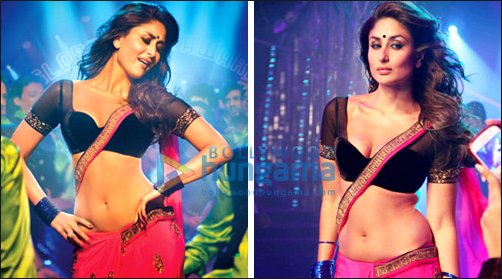 Ever since Madhur Bhandarkar rolled out his dream project Heroine, it was less of a dream and more of a nightmare, which everyone is

well versed with by now. And now that things were moving in the right direction, the posters of Heroine which hit the market, show a very 'curvaceous' Kareena

Kapoor, which is in contrast to 'not much in shape' stills of Kareena's from 'Halkat Jawaani' shoot which Madhur had very excitedly tweeted.

One look at both the posters, clearly exhibits the difference in Kareena's curves. While the 'original' had flab above her hips, the 'digitally touched upon' poster has a very

curvaceous Kareena, minus even an inch of fat! Madhur Bhandarkar however refused to comment on this.

On the other hand, Raaz 3 poster featuring curvaceous Bipasha also accused of being highly Photoshoped. Director Vikram Bhatt though calls it utter rubbish. He

also added that Bipasha is very hard working and has one of the fittest bodies and that not iota of Photoshop has been used in the poster.

The irony of Madhur and his films is that while he very intentionally believes in exposing the reality, he very unintentionally exposed what happens to the filmi posters