Karan Johar, despite all the debate on nepotism, is one of the most powerful filmmakers in the industry today who has the power to transform career of any newcomer if he sets his mind on to her. He is totally proud of his ‘students’ Varun Dhawan, Alia Bhatt and Sidharth Malhotra and is now mentoring Sara Ali Khan and Janhvi Kapoor for their big ticket Bollywood debuts. Aside from this, he has a corner in his heart reserved just for the kids of his old friend Shah Rukh Khan. He has even candidly revealed that he has a packed will and Aryan and Suhana are very much a part of it (this was before AbRam or his kids Yash and Roohi were born). Well, like Alia he treats Suhana as his child and therefore, is totally guiding her to take baby steps into the industry. 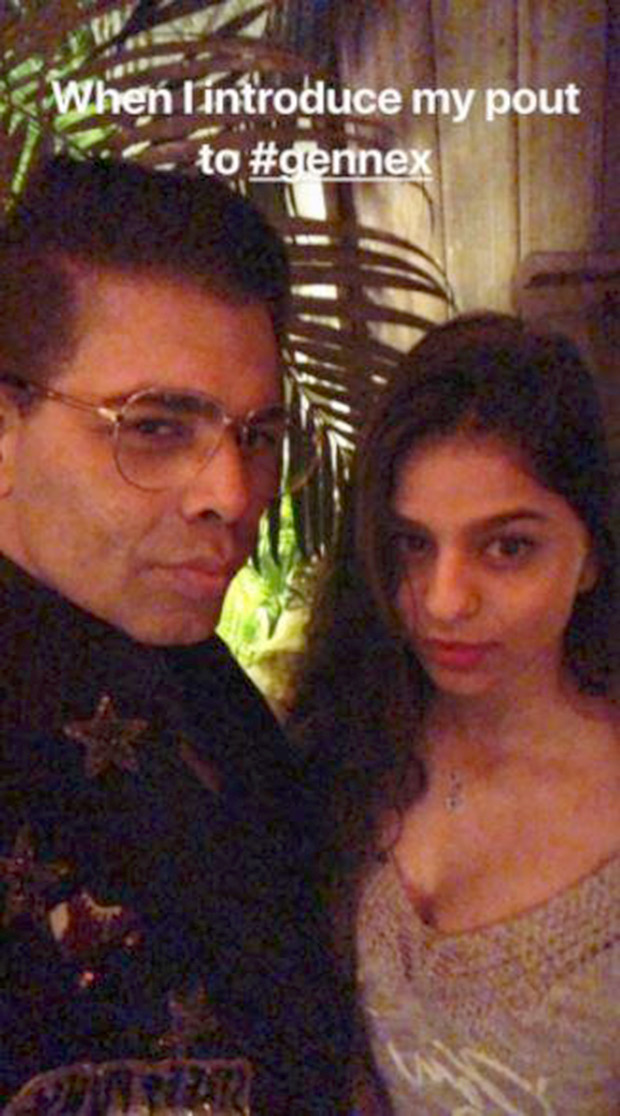 Right from making sure that her grooming is right to getting her make up, dressing sense in order…he makes sure that Suhana is turning the right heads in the industry. Well, we just took to social media last night and posted a picture of him teaching Suhana to pout perfectly! We know that KJo and his BFF Bebo (Kareena Kapoor) have the sexiest pouts in Bollywood and now, he is passing the mantle on to Shah Rukh Khan’s little one. Now, isn’t it amaze? He has correctly captioned the photo as “When I introduce my pout to #gennex”. The mentor is totally at work and how! Check out their pic below and tell us if you bet on KJo giving Suhana a smashing debut film soon?

For the uninitiated, Shah Rukh Khan recently disclosed that Suhaha wants to be an actress but not before she finishes studying for the same. She is in London pursuing her education in the field and has come to India on a spring break. She has also shot for her first magazine cover recently.