Known for his impeccable comic timing, Kapil Sharma may have gained fame with funny antics and chat shows, but the actor-comedian is also a popular singer. We have got glimpses of his talent when the host of The Kapil Sharma Show often hums or sings a few lines during the show. While more than a few times, we have seen him showcasing his funny side on stage, this time around, we got see the singer side in him. He shared the stage with some big names from the music industry like Hariharan and Shankar Mahadevan. 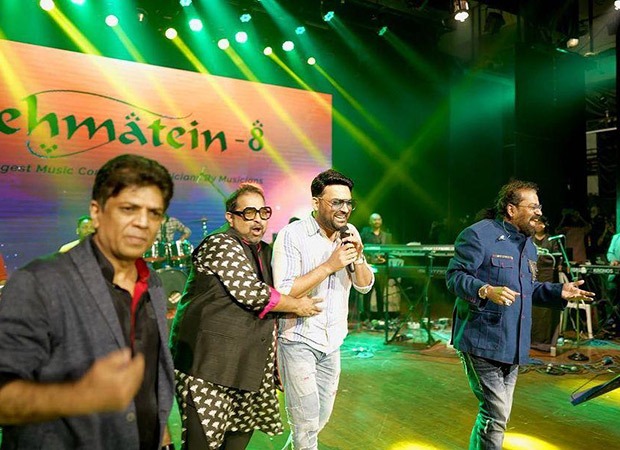 Kapil Sharma took to Instagram to share a video of him singing a few lines, as he accompanied Hariharan on stage. In fact, the comedian even asked the singer, “Yeh gawaane ke liye main nahi yaad aaya tha. (You didn’t remember me when you had to make someone sing” Responding to him, singer-musician Shankar Mahadevan added, “Kapil is a khatarnak singer” After hearing his comment, Kapil replied to it in his own quirky style adding, “Itna jaama kar ke rakha tha, saara aaj yahin nikaal diya. (I was saving my energy and today, I got all of it out).”

He shared this video with a caption saying, “Such an honor to share the stage with living legends @singerhariharana sahab n @shankar.mahadevan sir. thank you so much for all the love n warmth @jaspinder_narula didi @shilparao @anupjalotaonline ji Saurabh ji ❤️???? what a beautiful,memorable, musical n humorous evening it was ???? #rehmatein8 #gratitude #music #musicforlife #ilovemusic ????”

On the work front, Kapil Sharma is gearing up for the new season of The Kapil Sharma Show. In fact, the actor paid a tribute to Hariharan after he kicked off shoot for the latest episodes of the season. Here, have a look at his post:

The new season of The Kapil Sharma Show will feature some of his usual cast which includes his onscreen jodidaar Sumona Chakravarti, Kiku Sharda, Chandan Prabhakar among others and joining them this time will be former Bigg Boss contestant and TV actress Srishty Rode.