The Kapil Sharma Show will feature the cast of Sooryavanshi in the upcoming weekend, who will be seen having a good time on the show. Kapil is known to create moments where the celebrity guests candidly talk about their personal and professional experiences with one another during their shoot days. This episode will be no different with the hit on-screen jodi of Akshay Kumar and Katrina Kaif, who are back on the silver screen after a decade with the country’s biggest action director Rohit Shetty and ace producer Karan Johar in the film Sooryavanshi. They will be seen revealing some unknown facts about each other on the show. 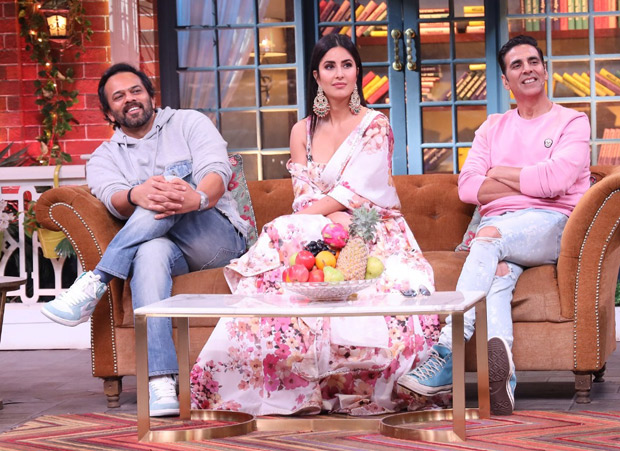 When Kapil asked Rohit to share a few anecdotes about Akshay Kumar and his experience of working with the star, Rohit narrated an incident and said, “We were shooting in Hyderabad for the film for several days and post completion of the shoot, AK had a pre-scheduled ad shoot but unfortunately due to heavy rain on the previous day, we couldn’t shoot all the sequences. Even then, on the next day, AK managed it so smoothly that he would shoot the film first, and then the ad shoot. He continued it for an entire day, and with so much dedication that he didn’t even eat his meals for the whole day."

He further added that, "He is such a huge superstar who could have easily said no to us stating that he couldn't do the film shoot because of his other line up but he completed both the things very smoothly. He is a very dedicated and hardworking person who completes so many films in a year which is an inspiration for everyone, rather than today’s young actors who think a lot before taking up projects or selecting scripts,aur aise hi 2-3 saal nikal jaatein hai," Rohit laughed.

Further, in the show, Akshay Kumar and Rohit Shetty reveal about the hard work and sincerity which the cops put in protecting the city and the country as the director-actor duo closely worked with them and even mentioned that how our cops work day and night for us, barring no holidays, and how it is a very thankless job.

Also Read: After Sooryavanshi, the next instalment in Rohit Shetty’s cop universe to be Singham 3!