Anubhav Sinha, who is known for his socio-politically aware films and his recent political thriller Anek is no exception. The film set in the Northeastern region of India, deals with the socio, economic and political situations of the Indian states located in this area. On The Kapil Sharma Show, the director came to promote his film with his lead stars Ayushmann Khurrana and Andrea Kevichusa. 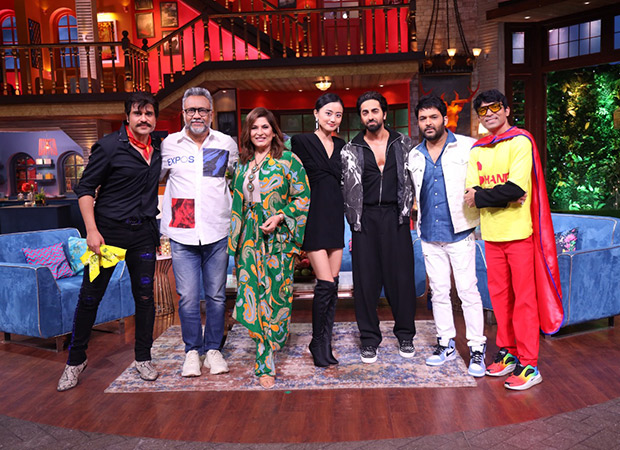 The Kapil Sharma Show: From learning Nagamese to Jackie Shroff’s mimicry, this episode with Ayushmann Khurrana, Andrea Kevichusa is all fun

Needless to say, the comedy show had some rather funny moments with the stars of the film aas well as the filmmaker. In one of the acts, Kapil Sharma ends up explaining about ‘bhaingan ka bharta’ to Northeast actress Andrea Kevichusa. Krushna Abhishek, who is equally hilarious when it comes to his different acts, sported the avatar of Jackie Shroff. He did a fab mimicry of the ‘Bhidu’ actor. Here have a glimpse of some amazing comedic moments in this video:

Besides these fun moments, there were also some serious conversations during the show. One of them was where Anubhav Sinha spilt the beans on his inspiration behind making this film and how it has a connection to the beautiful state of Nagaland. Answering Archana Puran Singh, who asked him about the "why" quotient behind the film, Anubhav Sinha said, "The genesis of the film began with my teacher, who used to teach me Tai-Chi, which is a little different from Yoga. He is from Nagaland; Deepak Das is his name. A lot of times, I used to ask him, "where are you from?", "what is your culture like? the food you eat?" among other things. During those conversations, every morning when we were working out, I got the spark, which then went to the film. I did not know much about this region as Ayushmann (Khurrana) rightly said. I did not know about the Northeast's seven states. I then got into it and started flipping through books as well as people. I had a lot of conversations with different people. There are not a lot of films or documentaries about the subject only articles."