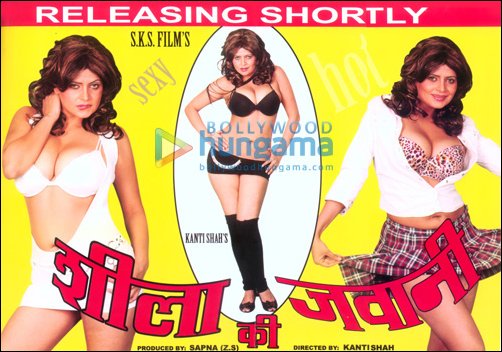 This is what they say 'Behti Ganga mein haath dhona'. On one hand, where Farah Khan and gang have spent millions of rupees and sleepless nights to perfect the song 'Sheila Ki Jawani', on the other hand is the filmmaker Kanti Shah, whose last film Rape was 'inspired' by the Shiney Ahuja 'rape' case.

Kanti Shah, for starters, also happens to be the undisputed baadshah of C-grade films in Bollywood. This time round, Kanti has gone ahead and has named his film Sheila Ki Jawani. While the film does not boast of any known names, the posters of the same have been made (read 'designed') so sleazy and the title so catchy that you can't ignore it. Shah has no qualms in admitting that the film's title was 'inspired' by the TMK's hit song and that he 'wrapped' up (no pun intended there) the film in 12 days flat!

Wait... there's more! While Kanti states that his story idea is original, the film also stars ...hold your breath... his wife Sapna, the protagonist in his film, who plays a small-time heroine in the film! NO.... the story doesn't not end here either. The brave daredevil Kanti wants to time the release of his film with Tees Maar Khan! You can release your breath now...as we are already out of it!

Katrina Kaif champions the right for…

Katrina Kaif is all smiles as she resumes…