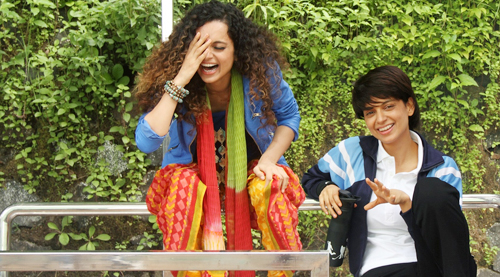 Ever since the promo of Tanu Weds Manu Returns, sequel to much popular Tanu Weds Manu, came online, what has caught attention is the double role act by Kangna

Ranaut. If her Tanu wasn't enticing enough, this time around there is also Datto on screen in her impeccable Haryanvi accent.

However, some of the few questions that are looming over the heads of quite a few viewers are - Is Kangna indeed in a double role? Is Datto same as Tanu? Is it the case of Rab Ne Bana Di

Jodi revisited? Is Kangna stepping into Shahrukh Khan's shoes as she wants to woo Madhavan by being the other woman, just like Anushka Sharma was left impressed with Shahrukh's Raj act in the

"Well, one can't look away from the similarities though," comments an observer, "After all, Datto isn't Tanu's twin sister who has emerged out of nowhere. The two women don't seem to have any other

connection either. Moreover, the film's theme too is about a man falling in love with his wife all over again after meeting Datto. I am led to believe that we may have Rab Ne Bana Di Jodi

There is a counter argument soon enough.

"With director Aanand L Rai, the least one expects is an original film," comes a comment, "Why would he rehash a film which is still etched in everyone's memory? Moreover, he has such loveable

characters in Tanu and Manu. Why would he want to take the Raj and Taani route? I am sure there is something else in the offering and the makers are hiding a lot more than what they are revealing."

While that is indeed the case, the makers are indeed having a field day.

Says Krishika Lulla, who has produced the film along with Aanand, "This is amusing. The film is not at all stepping into Rab Ne Bana Di Jodi zone. There is a reason behind why only Kangna

could have played Datto. Beyond that, for obvious reasons I cannot say anything more. Audience would see for themselves who Datto is and where she comes from. It is such a beautiful encounter that

you would fall in love with her too. As a matter of fact, when Tanu, Manu and Datto cross paths, it is so beautiful. Even in your personal life you would understand how relationship between a

While this was pretty much on the expected lines, there wasn't much luck from Madhavan's end as well when we tried to reach him.

All he said was, "No, there is no similarity with RNBDJ. Aisa kuch nahi hai. In fact you are the first person to insinuate that."