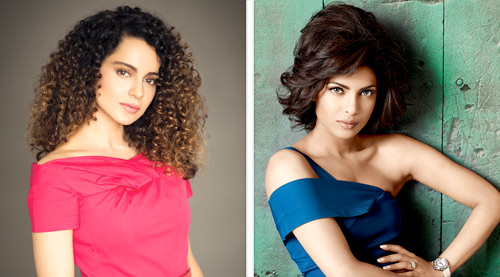 With Kangna Ranaut declaring war on Hrithik Roshan's hypocritical denial of their relationship-bringing the Pope into his protest against the alleged affair, for God's sake!-the actress has written off yet one more A-list leading man from her tick-box of possible co-stars.


For better or for worse several of the top male actors have officially or unofficially banned Kangna. So you won't see her with any of the Khan superstars. The only Khans who are willing to work with her are Irrfan and Imran. She has lately delivered a dud with the latter (Katti Batti) and is unlikely to find another producer brave enough to cast them together.


Ajay Devgn, Sanjay Dutt, Salman Khan, Shah Rukh Khan, Aamir Khan, Hrithik Roshanâ€¦these are some of the co-stars who have moved away discreetly from Kangna's range of casting, leaving the coast clear for the fearless actress to work with the likes of Vir Das (Revolver Rani), Rajkummar Rao (Queen) and R. Madhavan (Tanu Weds Manu).


Priyanka Chopra too is sailing in the same boat. In spite of her huge star power that extends all the way from Bandra to Beverly Hills, Chopra has in some way or another been blacklisted by â€¦take a deep breathâ€¦Akshay Kumar, Salman Khan, Aamir Khan, Ranbir Kapoor and Shah Rukh Khan. The only top notch heroes who are happy being paired with Chopra are Hrithik Roshan and Ranveer Singh.


Mind you, there is nothing official about the ban on these two female superstars by their co-stars. But one look at their roster of co-stars confirms our worst suspicions


Kangna and Priyanka are short of prominent A-list co-stars.


This is a good time for the two powerful actresses to consider the future course of their career. Given the complete domination of the male superstars in Bollywood, can Kangna and Priyanka survive without patriarchal patronage?


It's a question with no simple answer. On one hand the two female superstars may be congratulated for ploughing their own field, mining careers that try to be independent of male support. On the other hand, how far can a leading lady go unless she has the superstars on her side? Mumtaz and Sharmila Tagore, two of the biggest female superstars of the 1970s benefited immensely from their association with the baap of all superstars Rajesh Khanna.


Another superstar of that era Jaya Bhaduri did a host of good films with smaller co-stars like Anil Dhawan and Vijay Arora. But it was her pairing with Amitabh Bachchan which placed her at the center of the movement towards female superstardom. Zeenat Aman piggybacked her stardom on Dev Anand's patronage. And Hema Malini the biggest female superstar of her era, had every male superstar being cast opposite her.


The rules haven't changed since then. Deepika Padukone is equally at home working with Shah Rukh Khan, Ranbir Kapoor and Ranveer Singh. After Katrina Kaif's fall-out with Ranbir Kapoor she is looking to work with her ex-boyfriend and mentor Salman Khan again.


Given the scarcity of co-stars Priyanka has made her move into Hollywood at the right time. Akshay Kumar nahin, Dwayne Johnson hi sahi.


But what will happen to Kangna's career? Will she attempt to mend bridges with the co-stars who make a difference? Or would she be happy being the Queen with a king-sized chasm to fill?