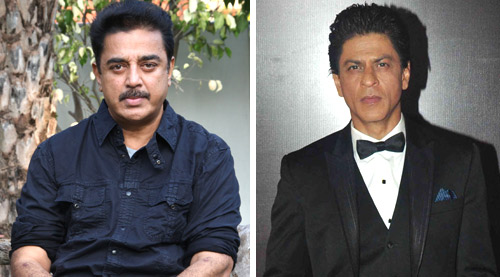 As Shah Rukh Khan turned 50 on Monday the Tamil maverick actor Kamal Haasan paid the actor, who played a Pathan free of fee for Kamal in Hey Ram, lavish compliments for his qualities of humility, practicality and apolitical astuteness.

Says Kamal Haasan, "Probably Shah Rukh knew where he was headed. Probably he did not know where he'd end up on the ladder but was willing to climb till he could no more. With that mindset, humility is something you had to train on right from the word go. Shah Rukh first practiced on a quality that most successful people try to practice when it is too late. Early trainers like him suffer least humility lessons, at the top late trainers learn the hard way. Humility is taught through humiliating lessons."

Kamal is all praise for Shah Rukh's powers of apolitical articulation. "Shah Rukh spoke the best part of his mind for all to hear and the worst part he digested like food and the world never saw it. No! That does not make him a politician."

Kamal Haasan is extremely fond of Shah Rukh. They go back a long way to the time when 12 years ago, Shah Rukh agreed to do an extended cameo in Kamalji's Hey Ram. Kamal Haasan who played the role of the cop on the lookout for a serial killer in the Tamil hit Vettaiyaadu Vilaiyaadu, expressed a keen interest in Shah Rukh playing the role in the film's Hindi version. When Gautham Menon, who understandably respects Kamalji opinion, asked the thespian who should play his role in the Hindi remake, Kamalji promptly gave Shah Rukh's name.

Kamal Haasan and Shah Rukh share a mutual admiration society from the time they worked together in Hey Ram in 2000. Shah Rukh had refused to charge any money for the film claiming that the honour of working with the great Kamal Haasan was reward enough.

Says Kamal Haasan appreciatively, "Shah Rukh is a true Pathan. A man of his words. I owe him a big favour."

For a party in Chennai to celebrate Kamal Haasan's career in 2013 Shah Rukh not only flew down he danced drenched in sweat from head to toe. Says Kamal Haasan, "He danced wonderfully on stage and it looked like he had come out of the bath and forgotten to dry."

The air conditioning at the posh luxury hotel had conked off leaving SRK swathed in sweat.
Says Kamal, "It was every celebrity-bash's worst nightmare come true. The air conditioning at the hotel broke down. We were all left seething and simmering in the heat, helpless, angry and bitter. Shah Rukh was fully and formally dressed in a suit for the occasion. His condition in the heat was indescribable. But look at this entertainer! He pulled off his coat, jumped on to the stage and danced, although he dripped sweat like he had just had a bath."

Shah Rukh, we are told, was pretty much completely drained out and on the verge of dehydration after his sweat-soaked performance. "But he didn't care. At that moment he forgot all his discomfort. It was just Shah Rukh Saab (that's how Kamal Haasan addresses his junior colleague) and the stage. He is a natural-born entertainer," says Kamal Haasan.

Says Kamal emotionally, "Shah Rukh is an artiste at heart and I wish my younger brother stays that way. I wish that success like it always has will sit very lightly on his shoulder. Wishing more success to him will induce only emotional sniffles but then that might be only from his detractors. Old friends like me never tire of his success. More to you, Brother, more of all that you love in life."