Last Updated 05.02.2023 | 9:35 PM IST
feedback language
follow us on
Bollywood Hungama » News » Bollywood Features News » Kajal Aggarwal takes up the KIKI challenge but with a twist and she has a message for all [watch video]

Kajal Aggarwal, who of late made news over her the remake of Queen, Paris Paris, has dived into her next film. And whilst shooting for the same, looks like she came across the latest trend on social media, the much talked about KiKi Challenge. The challenge that features everyone to dance on the streets as their car keeps moving over the song of Canadian rapper Drake, ‘In My Feelings’. This seems to have caught the fancy of the Magadheera actress as she decided to take up the challenge albeit with a twist! 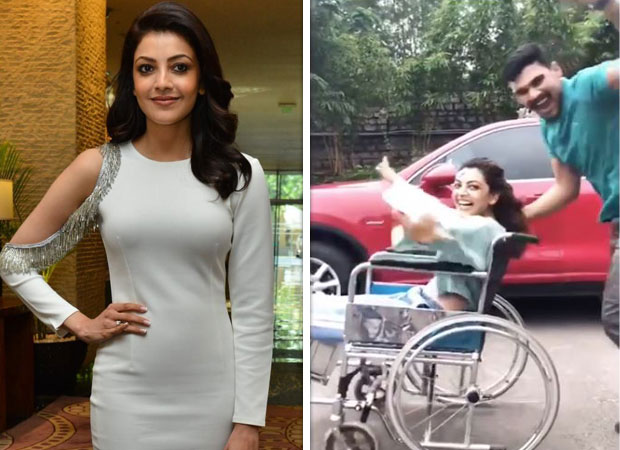 Well, Kajal Aggarwal decided to groove over the Drake chartbuster but she has a good and an important message to share with all her fans. Everyone who is aware of the KiKi Challenge is also aware of the consequences that followed. The dancing on the streets concept resulted in many accidents that led to the police warning the citizens to stay safe whilst taking up the challenge. Promoting the same message, Kajal decided to give a quirky spin to the video and accompanying her is her current co-star of her next, Bellamkonda Sai Sreenivas.

Kajal Aggarwal was seen taking up the Kiki Challenge not in a car but on a wheelchair. If you see the video closely you can also see the actress in bandages. She is seen dancing to the tunes of ‘In My Feelings’ at the start of the video and eventually by the end of it, there is a message wherein the actors ask everyone to refrain from trying dangerous stunts or else they may end up in a wheelchair.

Sharing this video on her Instagram, Kajal Aggarwal captioned the same saying, “Joining in the bandwagon, better late and safer! Our very conscious version. we you (but we love rules more) The madness we do on set while shooting an action sequence, with my Star of a partner-in-humour @sreenivasbellamkonda,”

Also Read : Paris Paris: Kajal Aggarwal will win your heart with her innocence in these deglam pictures from the Queen remake