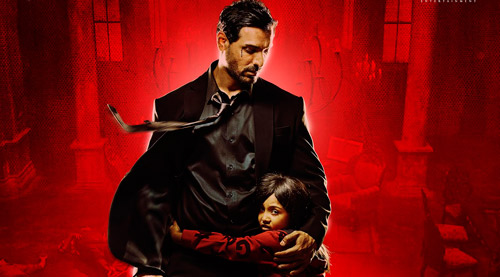 She played an adorable little girl in Kick where she succeeded in melting Salman Khan's heart. Now Diya Chalwad has done it again in Rocky Handsome where she has literally brought toughie John Abraham down on his knees. With her sharing good screen space with the hunk for a good duration of the Nishikant Kamat directed film, Diya is said to have delivered not just a stellar performance in the film but also made John look at his child co-stars differently.

"It is imperative that when a kid actor is on board, he or she is endearing enough to establish good connect with the audience. We saw how Bajrangi Bhaijaan did wonders due to the chemistry on display between Harshali Malhotra and Salman Khan. The film revolved around them and the fact that they were so comfortable with each other showed on screen. Same holds true for Diya and John as well," informs our source.

Not that John was 200% sure about this before Diya actually came on board. Reason being that while John has worked with a few child artists earlier too in his career spanning over a decade and around 50 films, the experience has been - at best - mixed. While he has made sure that as a professional everything comes well on screen, from the experience perspective he has been left wanting for more.

"This wasn't the case with Diya though," asserts John, who spent weeks with her during the making of the film, "Diya is so cute and endearing in real life as well. She is such a sweet girl. What helps is that she is a power packed performer."

Diya was just 7 year old when she reported on the sets of Rocky Handsome. Immediately, Nishikant Kamat and producer Sunir Kheterpal (who has made the film along with John Abraham as the producer) were zapped.

"You don't expect such maturity in performance from such a young kid," says Sunir, "And to think of it, Diya has a tough role to play. In the film, she isn't one of those kids who keeps smiling or playing around with parents and friends in tow; it is different here in Rocky Handsome."

"More than anything else, Diya changed my perception about children. Otherwise I have worked with children before and it has been a tough experience. However, Diya just breezed into our lives and changed it. I have been very lucky to have Diya on board, both on and off the screen. Our relationship has grown generically and organically."

We would like to see it all translate on screen.