Ayushmann Khurrana and Jitendra Kumar's upcoming film Shubh Mangal Zyaada Saaavdhan will see the two actors fall in love with each other. The film marks Jitendra's debut in Bollywood. However, before becoming Ayushmann's co-star, there was a time when Jitendra posed alongside Ayushmann as a fan. 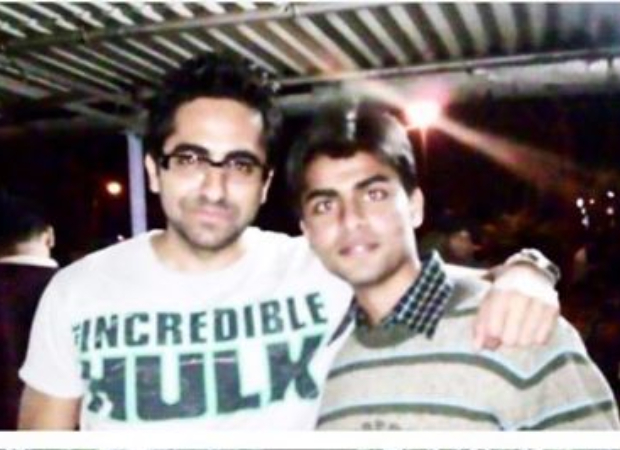 When Jitendra was studying in IIT Kharagpur he had posed for a photograph with Ayushmann. A collage picture, which juxtaposes the older picture with a still from the upcoming film, is getting viral. The picture was shared by Jitendra Kumar as his Instagram post.

Speaking to a news agency, Jitendra said that he first met Ayushmann in 2009 at IIT Kharagpur when the actor had come to cover a fest on behalf of MTV. He also revealed that he had spoken to Ayushmann about homosexuality back then not knowing that they would be doing a film on the same.

Shubh Mangal Zyada Saavdhan revolves around a gay couple and how they try to convince their families and society. The film stars Neena Gupta, Gajraj Rao, Maanvi Gagroo, Pankhuri Awasthy among others. Directed by Hitesh Kewalya and jointly produced by Bhushan Kumar’s T-Series and Aanand L Rai’s Colour Yellow Productions, the film has got a new release date. The film will hit the theatres on February 21, 2020.

Also Read: “It gives me great privilege to sing a love song for a forward-thinking film”, says Ayushmann Khurrana