Jasmin Bhasin, along with a few other ex-contestants, is back in the Bigg Boss 14 house as support for the contestants for one whole week. After watching the Weekend Ka Vaar in a separate room, unknown to the contestants, Jasmin revealed herself through a video. In this video, she gave feedback to all the contestants. She said, "Hi Aly. I am missing you a lot, I love you. You're doing amazing there, I'm here to support you. Rahul...I remember you were telling me about how nobody made you their priority. Now after watching you from outside, I wish I had made you my priority. Devoleena, I can completely relate to your breakdown the other day. Everyone has their trigger points and others might not understand it but I do since I have a pet as well. Rakhi you're doing okay, I just hope that you have taken the advice Salman sir gave on the Weekend Ka Vaar.” 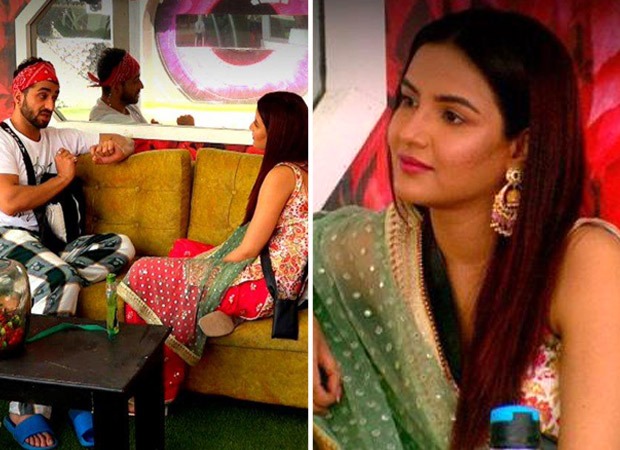 Soon, she came inside the house and reunited with Aly. The moment they saw each other, they hugged and didn't let go for a long time. They had an emotional goodbye when Jasmin was evicted and this reunion was even more emotional. After greeting everybody else, the two sat down on a couch and discussed Aly's performance in Bigg Boss, now that Jasmin had seen it from the audience's perspective. She told Aly to be careful and not trust Rubina that much but he instantly defended her saying that she's taken care of him. To that, Jasmin said, "Aly I'm not saying Rubina is bad, she's nice. But you are looking like a sidekick. Don't be like that, especially not in the task. Remember what had happened to me with her?  I don't want that to happen to you." Aly continued to disagree but before it got to an argument, Jasmin said, "Aly you are listening to answer, you are not listening to understand."  Of course, they sorted this out soon.

A little later, she had a little emotional breakdown since she was reminded of all the fights and bad memories from this house. But she was cheered up by a romantic song Rahul Vaidya wrote for Aly and Jasmin. We also saw some very cute and heart-warming moments between the two laughing, teasing, and joking around. We hope to see more of these cute interactions between the adorable duo.