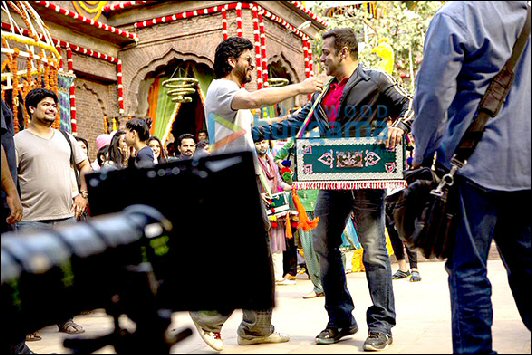 Gone are the days when Shah Rukh Khan and Salman Khan made up for great fodder for gossips and speculations. These are the days and time when the only term that describes them best is 'friendship'. And when it comes to the friendship between the two, neither Salman nor Shah Rukh Khan are leaving any stone unturned to promote each other's films. There have been testimonies for the same in the recent times.

Bollywood Hungama got its hands on an exclusive image of Salman Khan's sets of Sultan in Mumbai's Film City Studio. The said picture becomes a bit more special because it was recently visited by none other than Shah Rukh Khan himself. Needless to say that the whole situation was nothing short of being a 'picture perfect' one.


Reports have it that Shah Rukh Khan, who was shooting for his film Raees next door, got to know about Salman Khan shooting for Sultan in the vicinity. He then made a casual visit to the Sultan's sets. And when the duo met, what followed were moments of smiles, laughter and joy. Apparently, Salman Khan also told Shah Rukh Khan about how much he liked the Fan's trailer.