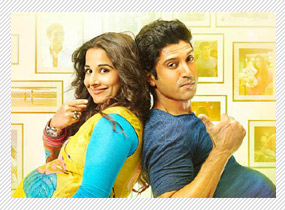 Having a niece and nephew in real life, Vidya Balan is quite adept when it comes to handling and holding babies. But shooting with an eight month old for Shaadi Ke Side Effects turned out to be quite a task for the actress.


The location was a set at Mumbai's Mehboob Studios and the scene required Balan to put the baby in a cot after rocking it to sleep in her arms. In fact, in the film it was the first time that her character was required to make the baby sleep separately from her. The actress recalls how the baby would be sleeping peacefully in her arms, but the moment she would put it down in the cot she would open her eyes. â€œIt was a simple shot, but we had to shoot it on three evening, from about six to nine, before we finally got it right,â€ smiled the actress.


Another interesting thing Balan revealed was that there would be more than one baby on the sets all the time. â€œWe can work with babies for a certain number of hours. In some shots we took the baby we had to show, and in some shots where the baby was not in the frame we shot with another baby. Like this we had kept enough provisions for repeat shoots,â€ she laughed.


Shaadi Ke Side Effects has Farhan Akhtar playing Balan's husband and is directed by Saket Chaudhary who had directed the original, Pyaar Ke Side Effects as well. The film is produced by Balaji Motion Pictures and Pritish Nandy Communications and releases on February 28.