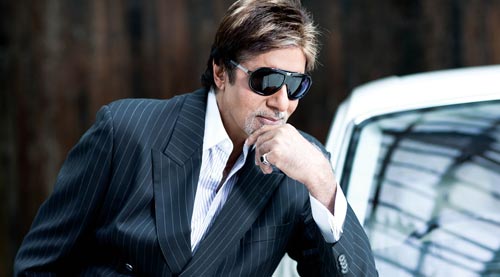 Ravi Chopra who made his directorial debut with you in Zameer has passed away. A personal loss, I know. You thoughts on Raviji?

What thoughts can one possibly have when someone personal passes away except shock and grief ! Kuki, as he was lovingly addressed, was a dear friend. He began his first directorial venture with me Zameer and since then we have made Baghbaan, Baabul, Bhoothnath and Bhoothnath Returns. We spent time together on the sets of our films and unofficially too. He had been suffering from a strange ailment for quite some time. And it is extremely sad to lose a friend so early in his life.

Baghbaan, the film that you did with Raviji turned out to be a very influential work. Why do you think it made such an impact all across the world?

Because I think it touched a very delicate and sensitive nerve, among us... Family issues have always solicited concern not just within an individual but more universally too. Conditions in the story were apt and telling. It gave the impression and rightly so, of the kind of discord that can and does exist in a family structure, and how it can relate to many others. It connected well with everyone.

May we expect a character in Shamitabh as distinct and challenging for you to play as the one's Balki conceptualized in Cheeni Kam and Paa?

I look upon each character I play with an impending challenge. 'Shamitabh' is no less.

The challenge for any filmmaker who signs you now is to create characters you haven't played so far. Do you agree?

That would be an obvious observation. At my age roles that are commensurate with my age shall come by, and I shall have to be grateful that they do.

You have so far played an amazing diversity of characters. Is there any one character that you still long to play?

I hope so. But I cannot say what it is. That would be for the directors to decide.

Have you signed any new films? May I know a bit about them?

Your very lovely daughter Shweta is a fine writer. She has just started a very readable column. Do you read her column?

Do you see Shweta as a very worthy descendant of your illustrious father?

All descendents are considered to be worthy in my thinking, whether they follow the antecedents or not. Genes do have the habit of bringing in a biological connect. If you feel Shweta has it, I am happy.

You are a formidable writer yourself...your blog being a living testimony to your writing skills. Wouldn't you like to pen your autobiography now?

I am neither formidable, nor a writer. My Blog is no testimony of it. In fact I find it quite ordinary. I do not see any reason to be penning an autobiography. That would be a most futile experiment in self-aggrandizement!

I have been with the show now for almost 14 years â€¦Over 600 episodes of anchoring for me and approximately 1020 contestants on the Hot Seat in front of me. This is in itself a staggering experience! I feel blessed to have had the opportunity to be in such condition and weather!

Yes, it is and I am happy with its success and the attention it created for Abhishek.

Abhishek has discovered a new very vital role for himself....that of a sports ambassador for kabaddi and football?

Passion should be garnered. Abhishek has that passion for the sport and he is following it to the best of his ability.