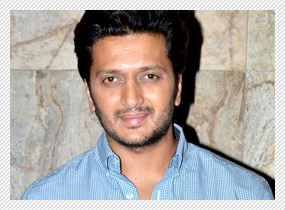 Ek Villain has hit the century, hence resulting in Riteish Deshmukh enjoying three to his name, what with Grand Masti and Housefull 2 being 100 crore affairs as well. In an industry where is it actually consistency that really matters, Riteish has shown that he has pretty much come of age and is handling sex comedies (Grand Masti) and family comedies (Housefull 2) with as much confidence as a psychological drama (Ek Villain).

Says Riteish, "It was tough to be playing this unpredictable character since there was no reference point available either. Say for example, if I had to show my romantic side, I could think of how Shahrukh Khan would spread his arms. Or if I had to punch or kick in an action sequence, I would think of Akshay Kumar or Ajay Devgn. However, here I was all on my own."

He continues, "There were so many different complexities to this character and it was important that since we were trying a new genre, we had to be just right. As an actor, I had to be thoroughly prepared all the time. There were a lot of discussions that went with Mohit, and it was required too since when you explore a genre like this, sabka sur ek hi hona chahiye. We couldn't think differently otherwise we would have gone astray. We all went with a gut feeling and the character evolved while shooting."

With him being one of the front runners now in terms of being offered some of the most exciting films being made today, what with Yash Raj Films' Bank Chor falling into his lap almost instantly, it is also apparent that a decade long stay in the industry has now got him into the big league.

As Mr. Dependable, Riteish is certainly being looked at in an altogether different light today, isn't it?

"Well, one can't push one's self in a particular league so as to be taken seriously," says Riteish, "I am a serious actor though. I have done my comedy seriously and now have played a villain seriously too. I am glad that the first time I have played a villain; it has been for a film like Ek Villain. As for my want to be in any league whatsoever, it is not in my hand. I am okay with whatever people see and perceive."

For him personally though, how much does Riteish feel that the film has benefitted him, both as a person as well as an actor?

"For starters, I wanted to see how convincing would I be on screen by turning into a cold blooded murderer. After all, I had to be this serial killer who is ruthless and yet has a humane side to him. The challenge was to be someone who you would hate but then also feel sorry for.

The fact that I managed to achieve that is something that is heartening for me. In that respect, Ek Villain is a personal victory, it is as simple as that," says Riteish.