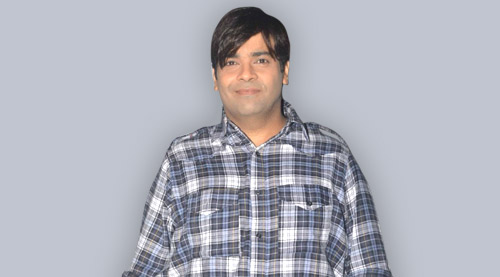 Kiku Sharda, the comic actor who has us in splits every week with his 'Palak' drag act on Comedy Nights With Kapil, has been to hell and back. On the night of Wednesday 13 January, Kiku was whisked away by the Haryana police for allegedly hurting the religious sentiments of a god-man's followers.


Now back in the safety of his home, in the warm company of his supportive wife and two anxious children who didn't know what was going on when their father was suddenly taken away, Kiku says he is sorry but undefeated. "It's not as if I'll stop laughing or stop raising laughter. I am sorry but not scared. This one incident has not soured my relationship with comedy. But it has made me question my own beliefs. I've never in my life insulted anyone. The humour that we generate on Comedy Nights With Kapil or for any of my other comic acts is never crass, vulgar, below-the-belt or offensive."


Kiku pleads innocence about the offended god-man's reach and following and holds the writers and the Channel responsible. "I had no idea of how important he was to his followers and the work he did. As usual I was given a get-up and my lines by the writers. I just went on stage and performed what was given to me. Little did I know that it would snowball into such a major controversy."


Kiku says he has received overwhelming support from all quarters. "The entertainment industry has been very supportive. Rishi Kapoorji, Farah Khanji, Sonakshi Sinha, Alia Bhattâ€¦they've all spoken up in my defense. But finally it was I who had to face the music when they whisked me away that night. Though I was treated well in Haryana, technically I was in jail with no access to my family. They were worried sick because they didn't know what was going on. My phone was inaccessible. I was accompanied to Haryana by my younger brother and my colleague from Comedy Nights Chandan Prabhakar."


At the police station Kiku's heart leapt to his mouth when he saw the number of the god-man's followers who had showed up. "There were around 800 people there, restless, aggressiveâ€¦ anything could've happened. That's when the full impact of the trouble that I was in, hit me. I've to thank the Haryana police for protecting me from harm. They escorted me inside (the police station) by hand, made sure I was not harmed."


Kiku is shaken by the experience, though not defeated in his endeavour to provide laughter. "I've always been a non-controversial entertainer. I don't know how or why this happened. No one has the right to hurt anyone's religious sentiments. Everyone is entitled to be offended. We've had Manoj Kumar Saab taking offence to the way he thought he was portrayed in Farahji's Om Shanti Om, etc. But the matter was handled through proper legal recourse and sorted out. Why was I whisked away in the middle of the night?"


Kiku has also received support from CINTA (the Cine & Television Artiste's Association): "I got a call from their chairperson Amit Bahl. We need to sit down and chalk out legal safety measures for all of us (comic actors). How do we know that when we are raising laughter we won't offend someone or some people in some part of the world? I don't want any of my colleagues to go through what I've gone through."