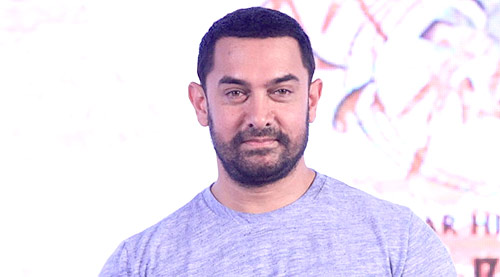 'I stand by everything I've said in my interview," said a defiant Aamir Khan who is riding a stormy sea post his comments on intolerance in India at the Ram Nath Goenka Awards in New Delhi on Monday November 23. "To all the people shouting obscenities at me for speaking my heart out, it saddens me to say you are only proving my point," Aamir added in clear lucid terms in his official press statement.

The comment made by Aamir on his reference to wife Kiran Rao's sentiments were the ones that were ridiculed in the ugliest possible terms by Political parties and trolls on social media. "First let me state categorically that neither I, nor my wife Kiran, has any intention of leaving the country. We never did, and nor would we like to in the future. Anyone implying the opposite has either not seen my interview or is deliberately trying to distort what I have said. India is my country, I love it, I feel fortunate for being born here, and this is where I am staying," Aamir said in clear unambiguous terms.

The 'fringe elements' who have been spewing venom and repeating the boring bytes of Aamir being an 'Anti National' and that he should go to 'Pakistan', Aamir hit back by stating, "To all those who are calling me anti-national, I would like to say that I am proud to be Indian. India is my country, feel fortunate for being born here. I am proud of being an Indian. I don't need anyone's permission for it."

There has been strong support coming for Aamir from varied corners. Thanking them he said, "To all the people who have stood by me, thank you. We have to protect what this beautiful and unique country of ours really stands for. We have to protect its integrity, diversity, inclusiveness, its many languages, its culture, its history, its tolerance, it's concept of ekantavada, its love, sensitivity and its emotional strength."

A mock funeral of Aamir Khan was conducted in Lucknow today by Shiv Sena who have equated, Aamir Khan, Shah Rukh Khan and Dilip Kumar with "snakes". Shiv Sena has called Aamir a 'self-appointed Mullah'. Saffron groups have suggested that Aamir is a good candidate for 'Ghar Aapsi' that he should convert into being a Hindu since both his wives were Hindus. Never-heard-before people are lodging police complaints against Aamir and a sedition complaint has also been filed against him. It is wonderful to have a celebrity who has the guts to take a stand and then stand by it despite ugly and undemocratic protests.

Aamir ended his press statement by quoting a few lines from Rabindra Nath Tagore's iconic poem 'Where the mind is without fear':

Where the mind is without fear and the head is held high,

Where knowledge is free,

Where the world has not been broken up into fragments,

Where words come out from the depth of truth,

Where tireless striving stretches its arms towards perfection,

Where the clear stream of reason has not lost its way,

Into the dreary desert sand of dead habit,

Where the mind is led forward by thee,

Into ever-widening thought and action,


Into that heaven of freedom, my father, let my country awake.