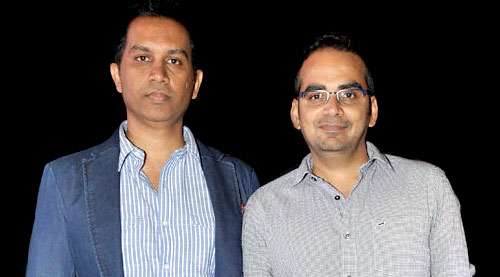 99, Shor in the City and Go Goa Gone - Ever since Raj Nidimoru and Krishna D.K. entered mainstream Bollywood arena, they have gone ahead and shifted genres while trying to bring in new content film after film. Now that they are making it large along with Saif Ali Khan in Happy Ending, expectations are even bigger. Since this is also their first hardcore commercial film, the director duo has the stage set to make this opportunity count. Moreover, with Govinda enjoying his stint in front of the camera and Ileana D'Cruz bringing on to the spunk element, Happy Ending is finding good buzz for itself hours before its release.

I think a lot of people were expecting a good entertainer but then the promo itself has revealed quite a few humorous moments. So what do we have in store here?
The tagline itself says that the film is a comedy about romcom. That by itself makes the whole premise funny. Yes, the film is a romcom but then it has a little bit of sensitive plot to it as well. It has a very real slice of life kind of feel it while being in the parameters of a sensible comedy. We thought we should bring in as much humor as possible in the narrative but then it had to ring true too. Happy Ending is not a fantastical over-the-top comedy. It is very real, yet funny.

It is straight forward though to interpret that Ileana is going through an entire image transition here. After all, she seems game for the highway stripping scene as well as the ones in the bedroom, right?
Well, we won't make her do stuff which is bad or vulgar. We are well aware of the good fun boundaries; it is all in interest of the script. Everyone is aware that whatever they are doing adds on the script; it is not there for the masala. Since these scenes went with the story and the character, Ileana was happy and comfortable.

How happy and comfortable is Kalki with the film? She seems to be almost invisible in the promo.
You can't have everything in the promo, right (smiles)? Kalki has a very good role in the film. She has done such a brilliant job in the film. While working with her we realized that she is such a great actor. We were like 'wow, how come we haven't worked before with her?' She is surely going to stand out in the film.

Talking about the promo, the way it caught on, was it a major surprise even for you?
We knew from the first cut itself that there was a lot of good material in place, hence the promo was bound to be good. As a matter of fact we were actually struggling to figure which promo to go with. We had to choose between the two and the one that you see is the one we went ahead with.