After two years of suffering through the pandemic, with things finally returning to some kind of normalcy, the 22nd edition of International Indian Film Academy Awards was held on June 3 and June 4 with much fanfare in UAE. Many celebrities flew from India to attend the grand affair and needless to say, it was a night of marvelous performances and celebratory victories along with a lot of onstage fun. 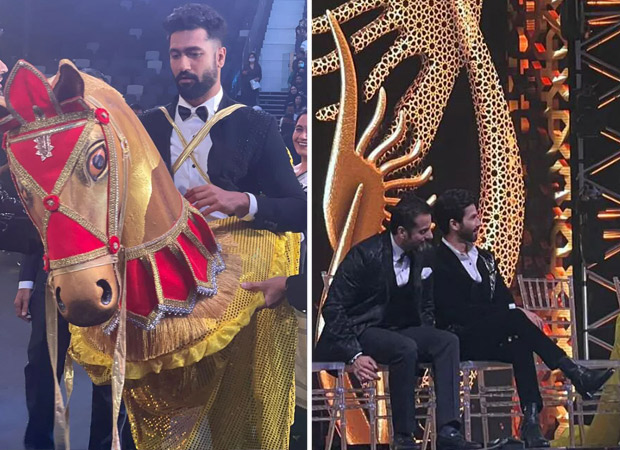 With Salman Khan, Riteish Deshmukh, and Maniesh Paul hosting the main awards night on June 4, it was filled with laughter and a lot of fun activities. Colors channel will be airing the event soon and shared some glimpses of the awards night on its social media and it seems like they decided to get Vicky Kaushal remarried and even made celebrities play passing the parcel on stage.

Colors channel took to Instagram to share a photo dump of Vicky Kaushal as he was literally asked to ride a puppet horse implying the famous marriage ritual of ‘ghodi chadna’. While his wife Katrina Kaif was giving the award function a miss owing to her shoot schedule, a cutout portrait of the actress in a bridal avatar was used for the re-wedding of Vicky. Here, have a look at these fun photos:

On the other hand, stars like Shahid Kapoor, Kriti Sanon, Genelia D’Souza, Suniel Shetty, and Boney Kapoor amongst others were invited onstage to play the ‘passing the parcel’. While we are unaware of who received what punishment, a few videos give us a sneak-peek into the shenanigans of the night. In one of the videos, we can see Salman Khan doing his iconic step of holding the dress with his teeth, which is the hook step of the song, ‘Jumme Ki Raat’ with Kriti Sanon. On the other hand, in another video we can see Riteish Deshmukh carrying his wife Genelia D’Souza as he runs around the stage away from co-host Maniesh Paul. Here have a look:

We also got a peek into some of the performances of the night which included Shahid Kapoor’s tribute to Bappi Lahiri as well as the sizzling performances of Nora Fatehi among others.