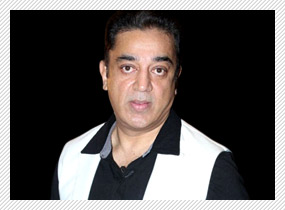 A timely tipoff from a retired police officer averted what could have possibly been a murderous attack on Kamal Haasan. Apparently this benefactor, an old Kamal Haasan fan, advised the amazing actor on Wednesday to not travel alone under any circumstance, as his life was in danger. Confirming this terrifying incident Kamal Haasan says, "Yes, I was warned. I wouldn't want to name the kind gentleman since his life would also be jeopardized. But yes, I was told not to travel alone."


The actor says he isn't afraid to die. "Death is what my opponents desire for me anyway, Creative death. Besides, yesterday (January 30) would have been a good day for me to be killed. My Bapuji (Mahatma Gandhi) was killed on this day." Kamal Haasan had directed Hey Ram, a film on Mahatma Gandhi's assassin Nathuram Godse in the year 2000.


On a less grim note, the advance booking queues for Kamal Haasan's Hindi-Tamil-Telugu tri-lingual Vishwaroop in Hindi and Vishwaroopam in Tamil-Telugu, have multiplied manifold in the last few days after all the controversies surrounding the film erupted. Chuckles the actor, "Maybe this would be my Pakeezah," referring to Meena Kumari's epic swan-song which swung into super-success when the actress passed away two days after the film's release.


The 120-crore rupee question that hovers over Vishawaroop is,why is Kamal Haasan being targeted by the Tamil Nadu government? The creepy question has found an answer from a close friend of the actor. Says the friend, "Recently Kamal was at a function attended by P. Chidambaram where Kamal praised Chidambaram. Madame (Jayalalitha) didn't like that at all. Kamal is being hounded for praising Mr. Chidamabram."


When one asks the beleaguered movie maverick about the alleged targeting by the Tamil Nadu government over his public support of the Chief Minister's opponent. Kamal Haasan remains non-committal. "I don't understand politics. I am not a politician. I am a filmmaker and an actor. If I am not allowed to make the movies that I want to, I will die. It's as simple as that. That's why I spoke yesterday at the press conference in Chennai about leaving the country and working in exile. Why should my fans feel shocked at my departure? Subhash Chandra Bose did it, didn't he? He moved out of the country in the later part of his life, and still remained a true Indian patriot. The same goes for me. No matter where I go I will remain a Tamil and an Indian. No one can take away, my national identity."


Kamal Haasan now moves the Supreme Court for a lift of the ban over his film in Tamil Nadu. Says the actor, "My lawyers will proceed on Thursday to Delhi on my behalf. Don't forget I come from a family of lawyers. So I am in very able legal hands. I will be in Mumbai on Thursday."


The premiere in Mumbai stands cancelled. "What premiere?" chuckles the irrepressible actor. "Wherever I go is a premiere these days. Even when I reach a television studio for an interview, I get a hero's welcome."