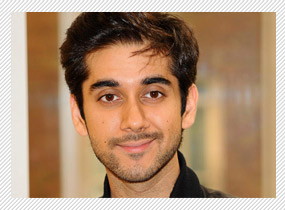 A couple of years back when Vinay Virmani knocked the doors of showbiz and decided to turn actor, it was close family friend and well wisher, Akshay Kumar, who backed him. Willing to lend his name to Speedy Singhs (Breakaway in English) and also making a special appearance in the film, he was like a pillar of support to the youngster who had just stepped into filmdom. Now that he is making his true blue Bollywood debut in the form of David, Vinay is very excited.

You seem to have made a quick transition from a true blue crossover film to a Bollywood outing.

Well yes, we knew that Speedy Singhs would be an experiment in this market. Now David is my first Bollywood film. I am blessed to be working with such an amazing director like Bejoy (Nambiar) with one of the most influential studios like Reliance backing the film. Bejoy is someone who truly defines the word maverick. I am thankful to him for believing in me and allowing me to step into a challenging role in the film. Despite the fact that I am pretty much akin to this kid who has not done a film in India, he had faith in me.

While you did wait for a role like this to come your way where you are playing a musician and also indulging in some action, did you ever think of taking a romantic route?

(Smiles) Nothing really stopped me from doing that and as a matter of fact I was actually supposed to do a romantic film. Unfortunately that got delayed and then David just came along. After working on the film, I have come to believe that in this industry every film comes with its own destiny. Like in case of David, it just happened one morning and before I knew, I was doing it.

I guess there were a few other names being thrown around as well for the three parts in David. Were you the first choice for the one that came your way?

I am not too sure who was supposed to do the role. May be Bejoy would be able to respond on that better (smiles). All I know is that when Bejoy called me, he said that he had seen bits of Breakaway and asked me if I would like to be his David. When I heard the subject and what he had in mind, I realized that it was going to be a very intense action film. I wanted to it then and there and once Bejoy shared his vision around me fitting in, I was game for it. He held my hand throughout.

Another man who did hold your hand at the very entry point in Bollywood was Akshay Kumar. Is he continuing to play your true blue mentor?

With Akshay it has never been about a professional equation; it is always family. He has done a lot for me personally and professionally. He has really influenced the way I have been brought up and I am sure we would always be in touch. I am thankful for the way he backed my Speedy Singhs in India. I just hope that now since he has given me a platform, the only way I can repay him is by standing on my feet.