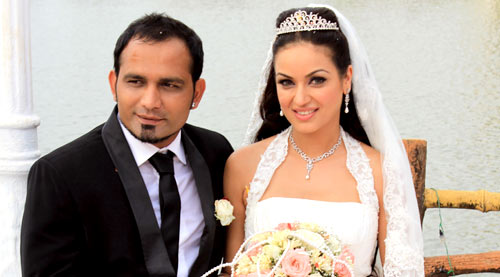 Last week there was news break about Maryam Zakaria expecting a baby on the coming Valentine's Day. It came as a surprise to one and all as no one was even aware about her wedding, leave aside pregnancy. We managed to catch hold of the young actress (seen in Grand Masti, Agend Vinod and Rowdy Rathore to name a few), who was happy to share details about her secret wedding and journey towards motherhood.

In the time of such huge social media presence, you still managed to hide your wedding with (choreographer) Arvind Thakur?

(Laughs) It is not about hiding; it is about what I tell people and what I choose not to tell. I wanted to keep my private life private; this is what I have always believed in. This is so important for me. For me, to become a mother is something that I feel so proud of. This is what I want to share with the world. It is a beautiful thing; it is miracle. I could have announced even earlier but then I was told that one should wait for at least five months before sharing this news even with close friends.

You get married soon after the release of your debut film Agent Vinod, right?

Yes, the film released in March 2012 and we got married in April. However those close to me advised that I shouldn't announce right now. After all, my work had just started happening and I was getting noticed. So I decided to wait. It turned out to be a two year long wait as Arvind and I felt that that we should talk about it when the time is right. Now that I am expecting, it couldn't have been a better time.

How did you meet Arvind?

He was assisting choreographer Remo D'Souza for many years and this is where I met him. He has even choreographed me in 'Dill Ki Billi' [Sadda Adda]. Even after marriage, he choreographed me for 'Nagin'. He is doing great in his career today and working on a lot of projects.

Are you comfortable with the fact that due to motherhood happening, there would be a short break in your career?

I will tell you something. When I wanted to become an actress and was trying to get work, I used to listen to a lot of people on what was the right step. I realized that I had to find my own way. I was learning Hindi and was getting these item numbers. People around me advised that I should stay away from item numbers as I won't get acting assignments then. I thought otherwise. I felt that if I have the talent, I would get my due. I think people should be open about such things. I managed to do movies as well in addition to the songs.

In fact your last big release was Grand Masti which went on to do 100 crore business.

Yeah, and the funny thing is that I started getting even more lucrative offers after I decided to start a family. Bobby Khan offered me a major role in Leela (which has Sunny Leone in the lead). Nikhil Advani approached me for Katti Batti. There were a couple of major television shows that also came my way. But that's okay; I am sure that after my baby, more success will come.

How are you taking care of yourself during pregnancy in this country?

Well, Arvind is going all out to make sure that I am comfortable. Meanwhile, I would be flying off to Sweden later this month to be with my family. I would be delivering the child there only. Then a few weeks after February I would fly back to India. I am in my happiest zone right now and loving every moment of it. These are exciting times indeed (smiles).