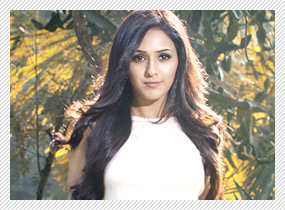 Her hero, not without good reason, is her father, Brij Mohan.

Neeti Mohan, eldest of four sisters - Shakti (who is also known now as an ace dancer), Mukti (also a dancer who wants to be an actor) and Kriti, has been singing since childhood. Studying at the BITS Pilani School, she would love dramatics and dancing, while singing was a "serious hobby" as she terms it. Her father encouraged all his daughters to excel in extracurricular activities even more than in studies.

An ardent listener of Lata Mangeshkar songs that she considers her "greatest teachers for playback" (Neeti's favourites being Lekin and Guide, which offered her voice "real challenges"), the singer recalls being a part of Delhi's Republic Day Parade five years in a row as part of her school band. Later, she learnt music formally at the Bhatkhande University there and continues training in Mumbai with Rajashree Pathak, a disciple of Shobha Gurtu and Prabha Atre, for the last five years.

Part of the winning Aasma band in 2003, Neeti also performed on television and came in touch with Deepak Gattani, who manages A.R. Rahman's concert tours. "I began by singing 'Barso Re' and 'Maiya Maiya' from Guru at a concert that also had Chitra and Sadhana Sargam, while I was the only newcomer! I soon became a part of his concerts, and I sing now even in Tamil and English," says Neeti.

Her debut song in Hindi films was 'Ishqwala Love' from Student Of The Year under Vishal-Shekhar, an instant hit. "Almost simultaneously, my solo 'Jiya Jiya Re Jiya Re' from Jab Tak Hai Jaan released and more and more people began to notice me," smiles the singer.

2014 saw Neeti leap into the spotlight with the Sohail Sen smash-hit 'Toone Maari Entriyaan' from Gunday, followed by songs in Shaadi Ke Side/Effects, Main Tera Hero, Kaanchi: The Unbreakable (in which for the first time she lent her voice for her sister Shakti Mohan in 'Kambal Ke Neeche'), Bewakoofiyaan, Darr@The Mall and Citylights. The list of composers spans from Pritam and Shankar-Ehsaan-Loy to Ismail Darbar, Sajid-Wajid and Raghu Dixit. Neeti has also recorded some songs for Lalit Pandit, "which are not yet out."

Neeti has also sung 'Catch Me If You Can' and the reprise version of 'Dard Dilon Ke' in The Xpose and struck up a great equation with Himesh Reshammiya. He has also given her 'Caller Tunes' and 'Just Look Into My Eyes' in Humshakals. "He's so chilled-out and focussed, a great guy to work with," gushes Neeti.

The Citylights solo ('Darbadar'), along with Gunday, have proved great platforms for Neeti to showcase her talent. "I feel that the correct way to approach a song is to become it!" says Neeti.

"You were right in your review that after looking at the lyrics and listening to Jeet (Gannguly)- da's tune and knowing how the song was being placed, I had to actually feel and think for Patralekhaa," she says. "Bhatt-saab nailed it and said that he wanted a "young Asha Bhosle" and so I had to fix my tone and projection."

"Similarly, the rowdy element was the key to my Gunday song," she goes on. "I personally feel that the spirit and mood of the song is more important than matching the vocals to the face on screen, though that factor must also be considered. For example, I have sung for Sonam Kapoor in both Raanjhanaa and Bewakoofiyaan and I had to bring in her softness as well as the definite attitude in her persona."

A "blessed moment" for her was when she was called for 'Jiya Re' by Rahman and she had to sing in the presence of titans like Yash Chopra and Gulzar. "Here again, the girl enacting the song was very spunky and I think Rahman-sir called me because I had shown a lot of spirit in the shows I had done till then with him!" she says, with a rightful tinge of pride.

Like both her sisters, Neeti has also studied dance - Bharatanatyam and Kathak - and has trained under Ashley Lobo. "I have taught kids and even trained to be an instructor," she notes.

Neeti considers herself as lucky that different aspects of her singing talent were honed at the right time by circumstances. "My classical training taught me how to approach a song in different octaves. I was exposed to folk music from Rajasthan, Haryana and Bengal among others at Bhatkande and that helped me with my 'throw', while at the time of Aasma and our shows and album I learnt a lot about texture of voice and harmony."

And the rest, we presume, was done by Lata Mangeshkar and her diverse composers, for Neeti Mohan has emerged as the brightest singer post-Shreya Ghoshal, amidst populous competition.

Finally, Neeti offers her personal 'gyan' on singing. "Singing songs is about human understanding, about observing people as musicians and as people, and about how you are as a person. I think that singing reflects a singer's persona and how you are as a person. And every syllable must have some energy. Like the Sanskrit language, in which every word has meaning."

And of course, she adds, there is the excitement as well: of how each song needs to be sung, how differently can expressions and emotions be conveyed, and what innovation can be brought in.

So that Neeti Mohan can become the song.