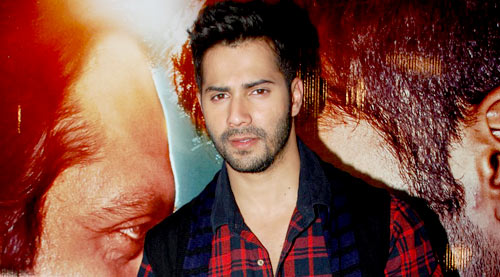 The praise for his performance as an avenger on the rampage in Sriram Raghavan's Badlapur is pouring in from all quarters.


But Varun Dhawan is unable to savour the glory. "I went back to shooting for Remo D'Souza's ABCD 2 the day after Badlapur released. So I really had no time to sit back and enjoy the feedback. But yes, the praise has been very humbling and inspiring. I am just a 3-film old actor. This kind of feedback is unbelievable for me."


The young actor confesses he looks for praise in his inner circle. "For me the most satisfying moment was when the director Sriram Raghavan said he liked my performance. I value the praise from the people I am closest to. When Karan Johar, my dad (filmmaker David Dhawan) and my mom said they liked my performance in Badlapur, I believed I had done well. They wouldn't lie to me."


Not that Varun doesn't give himself credit for the performance. "I worked really hard to get into character. Initially it was very difficult for me to get into this shattered character's mind. But as the film progressed I began to see Raghu's point of view. I began to feel like him. By the time I transformed into a killing monster I was completely into character."


Varun Dhawan admits doing some of the scenes was not easy. "The brutal sex scene was tough. For me to imagine my character forcing himself on a prostitute was a bit too much. It was the first time I was doing such a scene, and the first time for Huma Qureshi."


He is all praise for the censor board for allowing the requisite violence in Badlapur. "More than us, I think the credit for the impact of the scene should go to the censor board. Hats off to them for letting such a sequence remain. We talk about the censor board being conservative. But in our case they saw the film as a specific case, and did not apply general rules."


Varun takes offence to the belief that he was too inexperienced in the dynamics of pain to portray the suffering of this man. "Everyone thinks, 'Oh he's an affluent filmmaker's son, born with a golden spoon, and all that. What does he know about suffering?' That is such a narrow view of pain. Everyone suffers in his own way. When I stumble and fall I get bruised like anyone else. I may not have suffered a loss of the same enormity as my character Raghu. But then a loss on that level (the character's wife and little son are killed) is beyond the threshold of any individual's level of endurance."


Varun Dhawan says he has gone through his quota of losses. "During the making of Humpty Sharma Ki Dulhaniya I lost two family members whom I was very close to. We all have to deal with our own demons. Some cave in. Others like my character Raghu exteriorize their extreme suffering into violence."


Varun says he is in principle opposed to any act of violence. "No matter what the provocation violence is unacceptable. It can turn a hero into a monster. This is what we've shown in Badlapur."