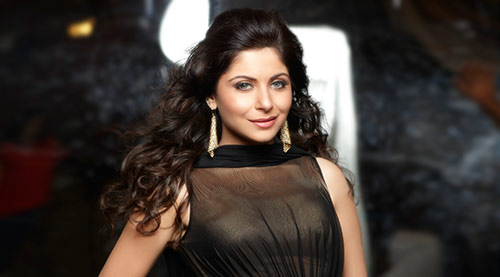 What happens when a Lucknow-born-and-bred girl learns hardcore classical music completes, first the Visharad and then her Masters in Music from Bhatkande University, and then settles in London as a young wife and a mother of three and is also exposed to all kinds of music there?

Kanika Kapoor's horizons broadened immeasurably, she feels, and she decided to use her Indian classical training base to excel in every kind of music, including playback singing since 'Baby Doll' in the 2014 Ragini MMS 2. "Playback singing is not at all my final goal, though I am doing a lot of it. I always wanted to be a performing artiste."

The Kanika repertoire now includes her latest songs, 'Chhil Gaye Naina' (NH10) and 'Desi Look' (Ek Paheli-Leela). In between, we heard her in 'Lovely' and 'Kamli' in the film Happy New Year and 'Chhithiyan Kalaiyan' from Roy. It's an almost hundred percent popular record to date in cinema, and she is now singing-apart from for Sunny Leone (more films to come after Ragini MMS 2 and Ek Paheli-Leela) for Alia Bhatt. In fact, she is to leave for this dubbing just after our meeting, and says that she will visualize Alia's face, expression and persona when she expresses herself in the song.

Meet Bros. Anjjan (the Meet Bros. were her brother's friends back home in Lucknow), Vishal-Shekhar, Sanjeev and Darshan Rathod, Raghav Sachar, Jitendra Shah and Amit Trivedi are among the other composers in cinema who have recorded with her. There are some more, she says, but she does not wish to reveal them now.

Just as she does not want to also dwell on an unhappy past like a broken marriage and a professional loss after signing up with Dr Zeus back home in London, who cheated her. "I am doing a lot of singles now, including with international artistes, like British producer Naughty Boy who has just won a Grammy. I am also doing Sufi music, which has such meaningful lyrics and great melody. I love any music that touches me," she says.

How come Dr Zeus is then billed as the composer of 'Desi Look', we ask. "It's one of the old songs we associated on, but the tunes are all mine actually. Dr Zeus is just a producer."

Kanika has always been a child prodigy, she preens. "I hail from a relatively modern Khatri family from Uttar Pradesh with a lot of emphasis on culture. My guruji was Pandit Ganesh Prasad Mishra, who would come to our house to teach my chachaji. He is from the banaras Gharana and has been a close relative of as well as guru to Pandit Rajan and Pandit Sajan Mishra. When my family saw my musical inclinations, I also began learning from him."

As school and other competitions became a cakewalk for Kanika, she also remembers with pride her dad buying her a big Yamaha keyboard during a trip to Dubai when she was just ten years old. "It was a very big deal then. I soon had a mini-studio in my house with huge speakers and all recording facilities."

But that was by no means all. She also became a child artiste with All India Radio and got huge stage exposure when she began singing for the shows of family friend Anup Jalota. "Between 12 and 15 years of age, I must have done 20 to 22 shows with him, with my very own 15 minute classical act, in which I would sing tarana, raags and semi-classical songs, including a 'Baiya Na Dharo' (Dastak) and a 'Jao Re Jogi Tum Jao Re' (Amrapali) with a lot of confidence."

Ask her favourite old composers and she mentions R.D. Burman. "I would cry while singing songs like 'Tujhse Naraaz Nahin' (Masoom)," she says simply.

Before a teenage marriage happened, Kanika had performed around the country, stayed in Mumbai to follow her education, signed up with Universal Music and even done acting classes with Kishore Namit Kapoor for a year. Not that she has any acting ambitions now.

The song that first caught attention after she moved to London was her cover of the Punjabi folk song 'Jugni' done with Dr Zeus. She had begun to experiment with light music, something always difficult for a highly-trained classical singer, in her studio in her garage there and soon a whole new world of music, including what she was listening to locally in London, including operas, made her unlearn a lot as she was broadening her music base.

"Have fun while singing it!" was the Meet Bros. Anjjan's brief to her when they called her for 'Baby doll'. "Give it your best!' they told her. And Kanika says she did exactly that. "I made the song and the emotions my own, I did not know that the song was to be filmed on Sunny Leone, and if I had known, it would have not made any difference because I did not know then who she was!"

Her 'fastest' song was 'Chhil Gaye Naina', for which she was summoned by Krishika Lulla of Eros one day and the recording, which she thought was just a scratch, was approved. "The film was ready and they wanted a promotional number. And it was actually out within ten days of the 'take'!" Kanika is aware that she has received more appreciation for this song from NH10 than her other numbers.

What next, by way of dreams or ambitions? "I don't run after anything, and I run away from people who run after me!" she declares, rather pompously. Impressed with her statement, she repeats it for our benefit as we have not caught the last part after "people". "Whatever I dreamt of doing, I did," she goes on. "I am living my ambition, there is so much to do and I have just started out. I do not over-think and I am going with the flow, so I am floating with positivity."