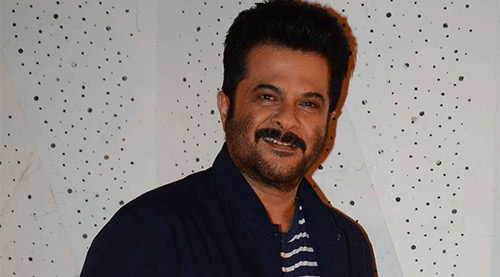 For the first time in his career Anil Kapoor plays a patriarch with grey hair. That's right. Anil Kapoor plays father to Ranveer Singh and Priyanka Chopra in Zoya Akhtar's Dil Dhadakne Do. Apparently, Zoya had to seek the help of Aamir Khan to convince Anil.

Laughs Anil, "Not only Aamir. Javed Saab (Zoya's father Javed Akhtar), Farhan and Ranveer, and my son Harsh they all convinced me to do the part. Playing Dad is not a problem. Haven't I played father to grownup kids in my series 24? I was only hesitating because in India a father's role is perceived in a particular way. Why would I have any reservations about playing Ranveer's and Priyanka's dad when I've a grownup son and daughters in real life? Besides, the guy I am playing in Dil Dhadakane Do is younger than me. He's around 52. I am 58."

Anil Kapoor was hesitant to play the patriarch in Zoya's film only because dads in our movies are perceived in a particular way. "Marlon Brando played father to James Caan and Al Pacino in The Godfather. But no one thought of it as father's role per se. Playing a father has never been a problem for me. 20 Years back I was going to play Aamir and Saif's father in Yash Chopra's Parampara. That didn't work out. Over here unless it is Bachchan Saab, the dad is a crashing bore in Bollywood movies. Thankfully my character in Dil Dhadakne Do is anything but a bore. I wish I was half as interesting as him in real life."

It was finally the role that attracted Anil. "I realized it was a father like no other. My character is really physically fit in spite of being the father of two grownups. In fact there was a scene in the
screenplay that Zoya didn't shoot where I teach yoga to all the ladies on the ship. Zoya wanted me to sport flowing hair so that it would blow against the breeze when it flew. She has made me wear sleeveless tee shirts for the first time on screen. If I may say so myself, I play the coolest dad. And I am glad I agreed to come on board."

Anil says he had a blast shooting for Zoya. "I've been closely associated with Zoya's family from the time Zoya and Farhan's mom (Honey Irani) wrote Lamhe in which I played an aging and sexy dad like the one in Dil Dhadakne Do. Later I played the lead in Honey's directorial Armaaan. The two families have always been closely associated."

Anil Kapoor is also very close to Javed Akhtar and Shabana Azmi. "Javed Saab watched over Dil Dhadakne Do. We constantly felt his presence. It was very reassuring."