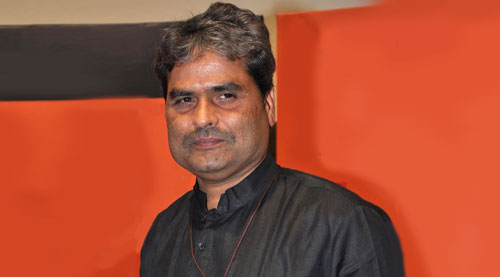 "I dedicate all my five national awards for Haider to Kashmiri Pandits", said Vishal Bhardwaj, on being asked by Bollywood Hungama's Faridoon Shahryar, at a press conference held today as to how does he react to the criticism that he didn't have any mention of the sorry state of Kashmiri Pandits in his widely acclaimed film Haider. Bhardwaj added that whatever happened with Kashmiri Pandits was extremely sad and that he didn't want it to be a mere footnote since the story of Haider was something else. He also said that maybe he will make a complete film to highlight the plight of Kashmiri Pandits.

When asked if he felt Shahid Kapoor should have won the 'Best Actor' at the 62nd National Awards announced today, Vishal said that it would have been great if Shahid had won since that would have meant that they would have scored a sixer! He also said that it's not fair to comment on 'Best Actor' since he hasn't seen the performance of Vijay.

Bhardwaj stated that he was very pleased with the impartial manner in which the awards have been assigned. He praised the Minister of State for Information and Broadcasting Mr. Rathore, who told him recently at his meeting with film producers that the Government won't be imposing their will on the way the film industry is functioning or its independence. It has to be noted that Mr. Bhardwaj had told a leading publication a few days back about the "Talibanisation" of the new Censor Board. Maybe the huge hue and cry unitedly unleashed by the film industry for once has resulted in what many would call some 'unexpected results' in the awards that have been announced today.

Vishal Bhardwaj said that the award for music is especially important because it was due to his music that he entered the film industry. He has won the award for 'Best Dialogue Writer' for Haider. But, how does he feel when his exceptional dialogues in Dedh Ishqiya went largely uncelebrated since the film didn't do well at the Box Office? Vishal said that what is good will eventually find its audience and appreciation with the passage of time. As of now, he plans to celebrate with family and friends. Time to let the drinks flow as if Jhelum unleashed!

Allu Arvind is all praises for Seerat Kapoor…