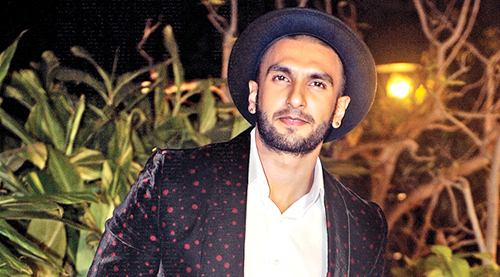 Ranveer Singh's rise as a sturdy reliable actor has been swift and steady. He made a strong impression with his first film Band Baaja Baaraat in 2010 and grew with each

actor's career to another level. He chats with Subhash K Jha.

What was your reaction when you first saw yourself on screen as Bajirao?

I saw the complete film for the first time on Tuesday. I was exhilarated. A lot of people have worked very hard on the film. It was a very painstaking film to make. Each one of us invested our

lives completely into the film. Our personal lives took a backseat so that we could all put our collective efforts up there on screen. And to now see it come to life...it all seems worth it.

How do you evaluate your own performance in Bajirao Mastani?

I find it tough to watch myself on screen. I'd rather see movies which I'm not part of. (Ponders) But I like it. Yes, I like my performance. Actually I'm over-critical of my work. It will

take 3-4 viewings before I can say whether I've achieved what I set out to achieve. I am always wondering if the role could've been interpreted in another way than the way I actually interpret it.

I need multiple viewings of Bajirao Mastani to have an objective opinion on my performance.

What did your parents think of your performance?

I was sitting next to them and watching. They loved it. Of course Mom is biased. She loves everything I do. But Dad is far more objective. He is a hardcore movie viewer. I get a very objective

How much do you think you've grown as an actor in 5 years and how much Sanjay Leela Bhansali contributed to your evolution as an actor?

I definitely think I've grown as an actor and Mr Bhansali's contribution is massive, to say the least. Every time I work with him-and so far I've had the opportunity to do so in two films-he pushes

me beyond my own boundaries as an actor to bring out something not everyone can. His understanding of human emotions and his instinctive grasp of the drama inherent in life puts him in a unique

Mr Bachchan once told me Bhansali puts actors in touch with emotions they didn't know existed within them?

Yeah, it wouldn't be wrong to say that. I keep telling him, I am his Robert de Niro and he's my Martin Scorsese. Mr Bhansali really gives you wings to fly as an artiste. He empowers you as an

actor. He gives you the freedom to exercise your own choices and he wants that freedom to be born out of your own experiences. He is a very special director with a very unique process of working,

and I am adaptable to that process. We truly have a great collaboration. We understand each other completely. He allows me the freedom to interpret scenes the way I want to.

How much of your own research did you put in to play Bajirao?

Mr Bhansali's team provided me with all the research material. They had done all the spadework for me. I just had to take a docket from them and go into semi-isolation for three weeks. I locked

myself up in a hotel room and began working on my character.

For a person as gregarious as you that must have been difficult?

No, I was ready to do whatever the part required me to. I was ready to plunge deep into my rabbit hole and indulge in some hardcore characterization. It was difficult to be on my own for the first

few days. After that I quite enjoyed it. I found the process of discovering the life of Bajirao quite therapeutic.

Did you spend all your time for three weeks becoming Bajirao?

Yes, I'd start early morning and go on till late in the night working on the character, his accent, his body language. I had copious notes jotted down, documentaries and books to read...

There isn't much documented evidence on Bajirao, is there?

I actually went into the lives of many great warriors across the ages, to find out how they lived.

And now you seem to own the role?

That's a huge compliment and responsibility.

How do you feel about your journey so far?

I am happy about it. Of course there is always scope for improvement and progress. But on the whole I think I've done well for myself.