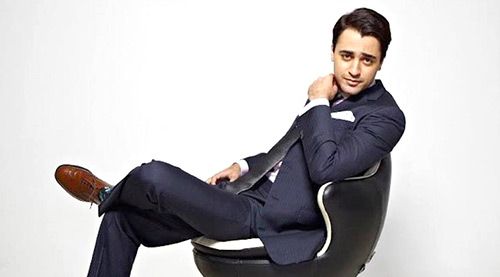 Imran Khan made his debut back in 2008 with Jaane Tu Ya Jaane Na that propelled him into the limelight. However his next choice of film proved to be

a rather low key affair. Not letting this faze him, the actor went on to do different genres of films. Currently, gearing up for his next release after 2 years, Katti

Batti, Imran Khan talks to Bollywood Hungama about the film.

To start with, what is Imran Khan feeling right now? Is he feeling excited, nervous, bored or impatient and why?
More than anything else, I am feeling impatient. Nikhil Advani and the whole team of the film have brought the film to such an extent that everyone is excited about the film. I

want the film to speak for itself. I am really impatient for the people to see the film. I am so happy and proud of the film. Without sounding cocky, let me tell you that I feel

that the people will surely respond to this film.

heard the title?
You will be surprised to know that how many people actually are still unaware as to what the term 'katti' 'batti' is. In Delhi, people say 'katti' and 'abba'. The word is

different and their gesture is different. My initial reaction was that I appreciated the honesty behind the title.

What are the parameters that you consider while choosing a film?
I always go for two things. First is that is this a kind of film that I would personally like to watch and then the second thing is that after seeing the trailer of the film,

will I go to watch the film or not. Emotionally, what draws me towards a film are human stories and emotional stories. I want people to feel relatable with the film.

While it was Salman Khan who convinced Kangna for the film, was there anyone who convinced you for the same?
It was Nikhil Advani who convinced me to do the film. Initially, I had read the script and had turned it down. Then, Nikhil pursued and chased me down and landed up convinced me

In a nutshell, what is the story all about?
The film starts with a guy who is at the end of his seven year relationship. The film gets 'unfolded' as it progresses.

What is your role in the film?
I play the character of Maddy, who is a very seedha-saadha and straight forwarded guy, who is very unremarkable. What makes him stand out and interesting is his love for

Payal (played by Kangna Ranaut). He feels that it is his love that defines him. He feels that the purpose of his being is to love Payal and if he is not doing that, then, he is

Do you identify with the role that you play in the film?

I do actually (smiles).

Katti Batti is about live in relationships and issues faced by couples. Did you feel a sense of dÃ©jÃ  vu or nostalgic about your real life, when you were seeing your

now wife and then-girlfriend -now-wife Avantika?
My emotions in the film came pretty naturally. (smiles). That is precisely half the reason why I signed the film. When Nikhil Advani was narrating the film to me, half the way

through, there were moments of nostalgia, when I could relive my moments spent with Avantika.

the song!
The said song has been shot using stop motion photography, wherein one single pose gets shot individually and then are woven as one, like in the case of flip book (in simple

terms). Every single image had to be posed and then shot, which was an extremely time consuming procedure.

Besides all the scenes that we see in the trailer, there is one scene in which Kangna says that "Kitna mushkil hai pot mein straight susu karna. Just hold the little

particular scene, everyone on the set was cracking up, including Kangna. She would say half the line and then, she would crack up. I was only holding my laughter to the maximum.

How did you react when you heard that Aamir Khan ghost-directed Katti Batti and changed the entire plot!
Aamir is the kind of person who attracts these kind of stories. And those people who say these things about him are the ones who have never worked with him. And the people who

have actually worked with him are the ones who speak highly of him and tell that 'I don't know as to how now I will work with any other actor'.

You sang a song 'Chaar Dina Ki' in Matru Ki Bijlee Ka Mandola. Any plans to repeat the same in your future films?
I am a terrible singer. (laughs).

How has fatherhood changed you as a person?
It has made me easy to prioritize things in life.

Lastly, what are your upcoming films.
Katti Batti. I am putting all my eggs in one basket (smiles).