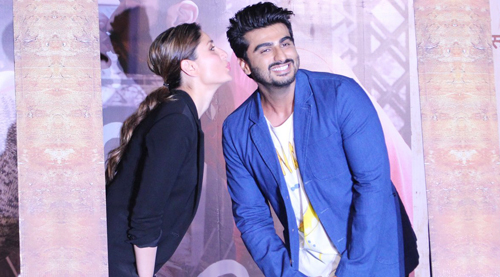 Being one of the most awaited pairs to watch out for in 2016, Kareena Kapoor Khan and Arjun Kapoor starrer Ki & Ka trailer definitely got a thumbs up from many, courtesy

their sizzling chemistry and interesting dialogues. Amidst several pictures from the film, one that grabbed the attention was that of a kiss shared by the lead couple, Kareena and Arjun for one of

Frankly, it's been a while since we saw Kareena kiss on screen. In fact, we hear that the actress had a no-kissing clause after her marriage with Nawab (Saif Ali Khan). However, it seems that Arjun

and Balki did cajole her to do it on screen to add to the chemistry. But re-doing that scene in front of the press wouldn't have been a very good idea we believe!

During the trailer launch, Kareena Kapoor Khan and Arjun Kapoor were asked to recreate this particular 'kiss' poster on stage and this is what the actress had to say - 'don't make me to kiss Arjun

live' but the emcee and the director of the film R. Balki were much more eager to see this sizzling couple kiss on stage. Well, to be very honest, there was hardly any chance of that happening.

Seeing that they even got a prop on stage, Kareena shrieked in fear saying, "How are we supposed to create this, then toh definitely divorce yaa". She continued to blatantly refuse saying, "Don't

public instead. The entire stage drama however came to a rather awkward end when the two actors decided to pose far away from each other, with Kareena pouting and Arjun only getting his cheek

towards her yet safely maintaining a distance. If that wasn't enough, Arjun further added about his fear about never getting an entry in Pataudi (Kareena and her hubby Saif Ali Khan's hometown

Well we wonder if Saif Ali Khan has any comments about this serial kisser in Bollywood, who by the way has kissed all his leading ladies on screen.