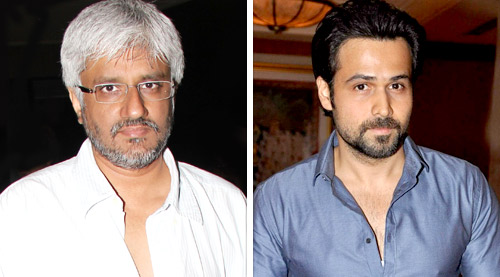 46 year old Vikram Bhatt started making films way back in 1992. After a modest debut with Pooja Bhatt and Rahul Roy starrer Jaanam and then following it up with the likes of Mithun Chakraborty (Gunehgaar) and Saif Ali Khan-Kajol (Bambai Ka Babu), it took a Rs. 60 lacs film Fareb (with a relatively unknown cast comprising of Faraaz Khan, Suman Ranganathan, Milind Gunaji) to bring him his first success. A couple of years later, he proved that he was made for bigger things when he delivered a huge success with Aamir Khan (Ghulam). With a career that has seen lows and highs, he went on to deliver biggest horror film of all times, Raaz 3. Three years since the film's release, he returns with Bhatt brothers and Emraan Hashmi for Mr. X. Obviously, expectations are good all over again. We get into a tete-a-tete.

A family film for Emraan Hashmi. Now that's exciting at the pitching stage itself, isn't it?
I think Emraan has reinvented himself with Mr. X. We all need to do that. I had a spate of horror films and honestly, I am tired of that. My last horror film was Raaz 3. Creature was not really a horror film per se. Now Mr. X is a film about an invisible man. Guess what, playing safe is the new risky today. If you do the same thing again, you won't succeed. I made horror films, then made a 3D film (Haunted), then made a 3D film with stars (Raaz 3) - ab aur kitna karoonga iss space mein? Same way it works for Emraan. How many heroines will he kiss? How many times would he kiss? He is not young anymore, there are younger stars. You need to reinvent yourself.

When it comes to reinvention, was it also the Bhatt factor that made you go for Mr. X, since you had to deliver them something special all over again after Raaz 3?
Bhatt saab is not my friend but philosopher, guide and guru. I discuss a film's plot and structure with him. We debate and argue. He has a way to challenge me what is best. Once the structure and emotional story is in place, it is much easier to get going. That was the case with Mr. X too. It took time to crack the idea and once that was done, it was a matter of putting scenes together.

But then films about superheroes are being made worldwide.....
I was sure this question was on the way (smiles). See, first and foremost, Mr. X is not a superhero film. Moreover, it cannot be and should not be compared to an Avengers or Spiderman. As a matter of fact, if I try to have a Spiderman in Hindi films then it won't work. The space that Emraan is in Mr. X, it is where he is Krishna's Arjun. There is a dialogue in the film where he makes this reference - kabhi kabhi krishna ko bhi arjun ki zaroorat padti hai. Now that emotional ethos of India cannot be in Avengers. In spite of having all the exposure, ultimately it is Shaktimaan that works because he is our guy. There is no point in aping someone because once you do attempt something like that, it doesn't work.

However, the Mr. India reference cannot be ignored, right?
Mr. India reference is a function of your memory. I will give you an example. Look at the generation that saw Aashiqui 2. 70% of them haven't seen Part I because it came in 1991. This generation wasn't even born then. You remember everything that has happened in your lifetime but then cinema exists for much longer. HG Wells wrote Invisible Man decades ago. My grandfather made Mr. X in 1931. Then Nanabhai Bhatt made one Mr. X in 1957. Then came Mr. India in 1961 and then the most famous one in 1987. So if you look at it, every generation has its own invisible man.

So how about Mr. X?
Yes, my Mr. X is invisible and I don't think comparison to Mr. India is bad because it is a good film. But then Mr. India came at a time when a superhero was seen as the superhero of children. I don't think that is true today. Look at all these big ticket Hollywood action films being made today - whether it is Batman trilogy or Spiderman series, they are all dark. They are not meant for 4-5 year old kids; they are meant for the adult in the kid. Superhero reference has changed from the kid in you to the adult in you; it doesn't talk down to the kids.

Since Mr. X is aimed at families, how does that play on screen?
To begin with, it is a very different from a couple of other Mr. X that have been made in the past, though the common theme is that it too is about a vigilante. Moreover, our film is a fabulous love story. As you know about the core plot of the film, Emraan and Amyra are playing anti-terrorist department agents. They are going to be married the next day but are put on a case urgently. The case is a ploy and Emraan is trapped. He goes into a refinery and there is a blast. Amyra thinks that he is dead but actually he is alive. He comes out, takes medicine for radiation and becomes invisible. He wants to take revenge but then Amyra doesn't know that he is her lover. She just wants to protect those being terrorized by the invisible man. This is why, one of the earlier taglines that we had thought for the film read as - For His Love and Against His Love!