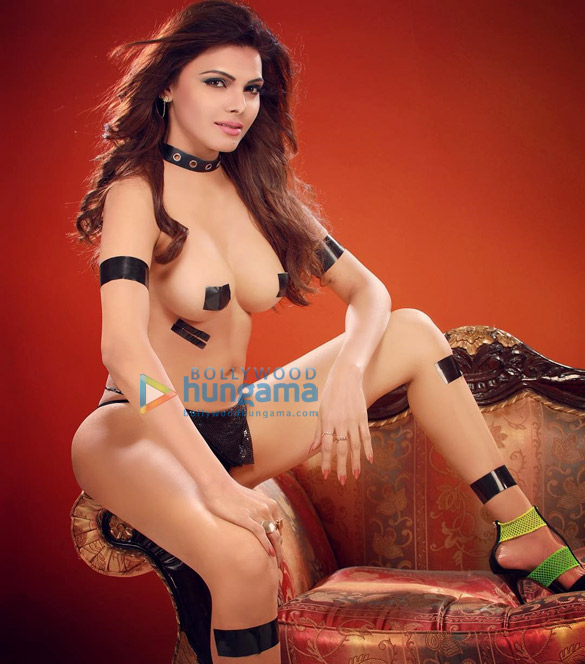 There are sex sirens and then there’s Sherlyn Chopra. As a film actor, she didn’t become as popular as say Mallika Sherawat. But she made a sizeable fan following with her hotness and sex appeal. Five years ago, she broke all boundaries by becoming the first Indian actress to pose nude for Playboy magazine. The on-the-sets pictures showed Sherlyn totally confident in her own skin (pun intended) and no wonder that it soon became a sensation.

And now, Sherlyn Chopra has once again gone totally nude. The picture, posted by her on Instagram, showcases the hottie sitting like a boss on a sofa. Her private parts have been hidden by her black, shining underwear while her assets have been smartly hidden by what looks like a black tape. These tapes are also pasted on her other parts of the body, that makes for a great impression. She looks confidently and proudly at the camera and only she could have pulled off such a sexy look while being almost nude. The caption of the picture suits her completely well as it reads, “Her favourite pastime? #breakingtheinternet #diva #queenofhearts #bossbabe”. In fact, it’s Virat Kohli and Anushka Sharma who are breaking the internet at present and it seems like Sherlyn is all set to overtake them with this super-hot and super sizzling picture.

Sherlyn Chopra has been working in Hindi films since 2005. She has featured in Time Pass, Jawani Diwani: A Youthful Joyride, Naughty Boy, Red Swastik and Raqeeb. She had a small role in Rani Mukerji–Shahid Kapoor starrer Dil Bole Hadippa. She was also a part of the ambitious film Kamasutra 3D but due to differences with director Rupesh Paul, she opted out of it. Her last film appearance was in a song in Wajah Tum Ho.