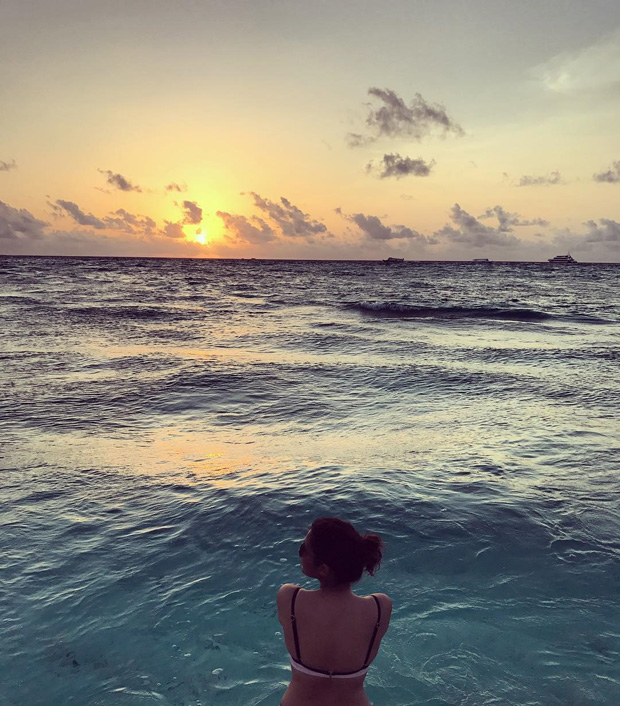 Parineeti Chopra may not be the most glamorous actress around. But her Instagram handle is worth following as her posts are quite cute and quirky that is sure to put a smile on your face. That’s also a reason apart from her popularity as a mainstream actress that she has as many as 12 million followers on Instagram.

While all celebrities had already given New Year wishes to their Instagram followers on the first day itself, some as soon as the clock struck midnight, Parineeti Chopra, however was conspicuous by her absence on the photo sharing website. Her last posts were made on December 29 or 30. Fans were waiting eagerly for a picture that would be associated with wishes for the New Year. And yesterday, she finally uploaded a picture that made the wait worth it. It shows a bikini clad Parineeti facing the vast sea. Her face isn’t visible as the picture is clicked from the back. “Take me backkkk!!! Ocean lustingggggg. Sigh. HAPPY NEW YEAR EVERYONE!!”, was the caption with the picture.

On the film front, Parineeti Chopra at present is filming for Dibakar Banerjee’s Sandeep Aur Pinky Faraar, co-starring her Ishaqzaade co-star Arjun Kapoor. Her next film also features Arjun – Vipul Shah’s Namastey England. In 2017, her first release was Meri Pyaari Bindu, co-starring Ayushmann Khurrana. But her other release, the comic caper Golmaal Again, emerged as a huge hit and even crossed the Rs. 200 crore mark.