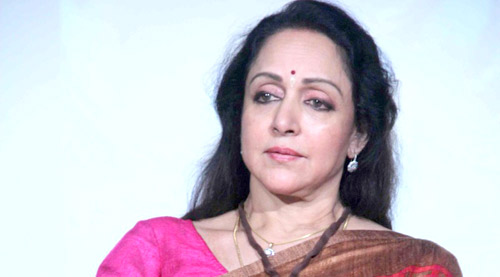 Having spent a large part of last weekend defending actor and politician Hema Malini for the way she was made out to be a monster, it was ironical to be one among the many who

deserted the cause of standing up for her post her tweets thanking her fans, shooting back at the media and laying the blame of the little girl's death at the doors of her father.

Films and Politics are two mediums that are strangely similar- perception matters much more than the actual takeaways. Politicians turn messiahs and actors become lovers and beloveds, for the

lesser mortals. Both promise an escape from reality. However, there is a stark difference too. Unlike Politicians, who are assumed to be thick skinned, self-centered and the be all and end all of

the system, a film star is usually considered vulnerable and weak in comparison. For any actor- politician, therefore, it is a tough act to balance- and thus critical that what is spoken or

written, or tweeted in this case, is well thought out, clearly crafted, finely balanced and above everything else, timed well.

Needless to say, those advising Hema Malini at this hour ought to refurbish their tools since this is far more damaging than anything else to her reputation. The dream girl was crassly targeted,

memes surfaced on social media immediately post her accident, poking fun at her and many in media took little time to breathe fire on her. She gracefully maintained stoic silence and soon there

were people who took up her cause as well. The discourse on the accident was clearly lopsided and against Hema with the family of the little girl getting instigated to say the "Right Things" that

further damaged the actor's image. Under no circumstances, can a badly injured person, who also happens to be a senior citizen, mind you, be conscious and conscientious to look out for the other

victims in a crash. So any blame ought to have been laid on the people who took charge of taking Hema Malini and the family of the little girl and took them to Hospitals. Hema Malini did nothing

It was also justifiable that she didn't go see the family before flying off to Mumbai. With so much of media backlash and opinion being formed against the actor, it seemed fine from her perspective

to not go and meet the family, because she really wasn't at fault for what happened. It may have been a security issue for all one knows. Even that was ok.

There was news of Esha Deol saying that her mother will offer monetary support to the victim's family and that she was saddened by what had happened. Now, if only the discourse from Hema Malini had

stopped just there. Hema Malini was the victim of media mayhem in the eyes of a lot of people, not just her fans. She was sensitive enough to offer support and gracious enough to not speak out

Yet, somewhere the need to react caved in everything else.

platform like Twitter. Social media does not tolerate high handedness of any kind. Celebrities and Commoners are leveled there because people can directly write back and express their opinion too.

It was just wrong- politically, socially and morally to go out there and tweet. Politically- there cannot be satire or a tone of arrogance while addressing an issue like this. Socially- being a

part of the privileged lot, it's a must that celebrities show their humane side, because that is the only connector between them and the masses. Morally- let us assume, even if it was the fault of

the father of the little girl, why would anyone use a platform like Twitter to air views and not express it personally when talking to the family. Perhaps a good old handwritten note to the family

Whatever one knows of the actor, one may offer a benefit of doubt that she didn't really gauge the way the statement was worded. It's clearly not her vocabulary including the satire and the works!

But she must take the blame for it because it's her face, her twitter handle and it was her judgment call. It has led to a loss on many counts for her. Dream Girl's nightmare, this.