Just a day ago, veteran star Dharmendra turned a year older and fans and family made his day even more special by celebrating it in an intimate affair. While son Sunny Deol and grandson Karan Deol planned a havan for the well-being of the Bollywood star, Dharamji’s wife and actress Hema Malini rang in his birthday with a cake cutting ceremony. The yesteryear star and the couple’s daughter Esha Deol took to social media to share photos from the birthday celebrations. 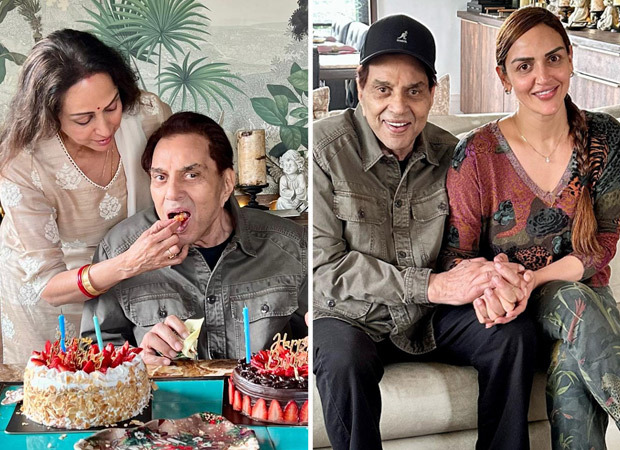 Hema Malini took to Twitter to share a series of photos from the low-key and intimate birthday celebrations of Dharmendra. While there was a mandatory photo with daughters Esha Deol, Ahana Deol, and son-in-law Bharat Takhtani, there were a few other photos of the yesteryear popular Bollywood couple too. It also featured a photo where Hema is seen feeding cake to her husband lovingly. The original ‘Dreamgirl’ captioned it saying, “Birthday Celebrations today - at home”.

Meanwhile, another set of photos from the celebrations were posted by daughter and Dhoom actress Esha Deol. She took to Instagram to share a couple of photos with her father and also posted a sweet birthday note along with it saying, “Happy birthday papa… I pray for you to always be healthy & happy. Because of you we are….. you are our pillar of strength. Always the strongest. We simply just love & adore you. Love u…”

On the work front, Dharmendra will next be seen alongside Ranveer Singh, Alia Bhatt, Shabana Azmi, and Jaya Bachchan in the Karan Johar directorial Rocky Aur Rani Ki Prem Kahani that is expected to release in 2023. Besides that he also has Apne 2 with sons Sunny Deol and Bobby Deol in the pipeline. Just a day ago, it was announced that the veteran actor has signed on another interesting project titled IKKIS which will star Amitabh Bachchan’s grandson, i.e. Shweta Bachchan’s son Agastya Nanda and is directed by Sriram Raghavan.