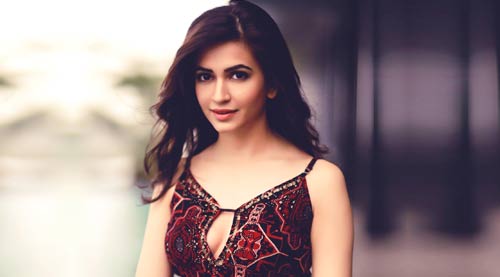 After doing close to 15 films down south, Punjabi girl Kriti Kharbanda has now made her Bollywood debut with Raaz Reboot. With decent to good reviews coming her way, she has managed to fetch attention in the part of a woman possessed. We get chatting with the young woman.

Since you have had a good stint in south for last three-four years, Hindi offers must have certainly come your way. What was your thought process during this phase of contemplation?
My career has meant a lot to me, but then, that's not the only thing about me. I have seen girls going to different cities and making efforts to get into films. That needs guts and in that perspective, I am very content. Hence, for Bollywood, I didn't actually go all out. I did a couple of auditions but aisa kabhi nahi tha ki Hindi picture karni hi karni hai. I did not make many attempts though I did have contacts. See, after being in the industry for a while, you tend to meet people and connect with them. I did have a couple of offers in last couple of years but then my time was dedicated to South where I did a dozen films.

You must have been tempted though.
Yeah, there was a time when a very big offer came my way. They didn't even audition me and just wanted to be there. It was a 45 days shoot and they wanted me to step in. The leading man opposite me was also a very big actor. However, I was shooting for a Kannada film at that time. Since that Hindi film was set to go on floors, I understood that they could not change the schedule for a new girl. On the other hand, I couldn't leave my South film in lurch. After all, these are people who cast me and made me a star. So I made a conscious decision to let go of that Hindi film. It did pinch me for a while, but then, I was alright.

And then Raaz Reboot came...
True. Again, they wanted me to be in Romania for one month. But, then fortunately, there wasn't an issue of dates this time around. I was more or less done with the other film that I was doing. Moreover, I wanted to be a part of this film since you should always work with people who want to work with you instead of the ones in front of whom you have to beg for work. When someone shows that faith in you, there should be reciprocation. Moreover, Raaz is a franchise where they could have got any established actress. Still, they cast me who was yet to make her Bollywood debut.

Horror as a genre would have been exciting too for you?
Absolutely. If you look at Raaz 2 and Raaz 3, each one of these outperformed the one made before it. Horror as a genre with 'A' rated certification has a very limited audience. Still, Raaz 3 did so well. For the franchise, we have a director like Vikram who has monopolized the market of horror; he has mastered the art. Inherently, people are very afraid of loneliness. For me also, it is the biggest fear. This is the reason why I could relate to Shaina. She is new to the country and doesn't know anyone. This leads to a psychological turmoil. When people watch her, they would feel that yeh mere saath bhi ho sakta hai. I have heard stories from people who have dealt with hallucinations and presence of unknown forces around them. However, they don't speak up because they feel ki log kahenge yeh paagal ho gayi hai!

From your presentation perspective too, this isn't being one of those ultra-glamorous quintessential Bollywood leading lady launch. That's different as well for you, isn't it?
When I am playing a character, then, I want people to relate to me. I would be flattered if people call me Shaina now. Down South also people know me more by my character's name. As for the glamour quotient, when I signed this film then I asked Mukeshji why did he think of me. After all, Raaz, as a franchise, has a certain amount of sex appeal that you look forward to in a girl. Mukeshji said that they needed a quintessential Indian face for a girl; someone jisko dekh kar audience kahein ki 'hai bechaari, iske saath aisa kyon ho raha hai' (smiles). They wanted her to be vulnerable so that every Indian connects with her.

Well yes, you are coming across as very Indian in the film, despite a Romanian setting.
We had to work hard on my look as I had come across as a housewife and not a 21 year old girl. I also had to be a lot serious in front of the camera, whereas, inherently, I am always charged up. In fact, Vikram used to say that I should keep my energy back in the hotel because while on location, my character had to be on the quieter side.

You did have to go through a lot of physical turmoil though, especially, in the scenes where your character gets possessed.
That's correct, and to think of it, I have done my own stunts in the film. Especially, during the film's climax,mujhe chalna nahi padh raha hai, main bas baithi thi. So, I just loved the idea of being lifted and thrown around via cables! To be jumping up and down was a lot of fun actually.