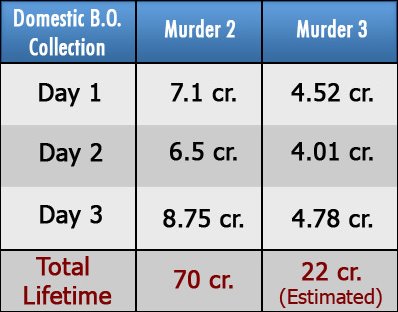 Vishesh Films' and Fox Star Studios' Murder 3 starring Randeep Hooda, Aditi Rao Hydari and Sara Loren opened to a mixed response last Friday (Feb 15). The film also marked the directorial debut of Vishesh Bhatt (son of Mukesh Bhatt). The film managed to collect Rs 13.31 crores at the B.O. over the weekend. It raises a few questions as far As the business of the movie if concernedâ€¦ Is the B.O. collection good enough? Would the collections have been higher had the film starred Bhatts' blue-eyed boy Emraan Hashmi? It may be recalled that Murder 2 (starring Emraan Hashmi) which released almost 2 years ago had an opening weekend of appx Rs 22 crores and went on to do a lifetime business of close to Rs. 70 crores. So wouldn't it have made sense for the Bhatts to cast Emraan in the third installment of this franchise as well? Read what some of the prominent distributors had to say...

Says Anil Thadani (Rajasthan and Bengal circuit), "It's a superb collection given the star-cast and branding of the film. You can't compare an Emraan Hashmi starrer with a Randeep Hooda film. Randeep is slowly climbing the ladder while Emraan is already on top of the ladder."

Guru Shenoy (Mumbai circuit) too is happy with the response the film has received. He says, "It's not at all bad for a film with such a star-cast. The film has been reasonably sold and should prove to be a profitable venture for the Bhatts. It's purely worked on the Brand Bhatt and Brand Murder. It's done much better business than the other release of the week Jayanta Bhai Ki Luv Story, this despite the fact that Vivek Oberoi is a bigger star than Randeep Hooda. You can't compare it with Murder 2 that starred Emraan Hashmi because he is a huge star and if they had taken Emraan in this film, the cost of the film would have also gone up by around Rs 8 - 10 crores."

However, Manoharlal who handles the East Punjab circuit states the film has performed poorly. "I would say that the response to the film is absolutely BAD! Murder 3 is an absolute disaster. It made a mere Rs. 98 lakhs in Punjab. I feel that the bad response was sheerly due to the presence of Randeep Hooda as the hero. Had it been Murder's original hero Emraan Hashmi, I am sure that the collections would have doubled and tripled."

Meanwhile, Vijay Singh (CEO of Fox Star Studios- India) seemed mighty pleased with the way the film has opened over the weekend. Singh said, "We are more than satisfied with Murder 3's performance at the box office. The film was a profitable venture from Day 1 and over the weekend, we have consolidated our profit margins. In addition, we now have now delivered a hat-trick with Vishesh Films with 3 successful films in a row namely Jannat 2, Raaz 3 and now Murder 3. When the film was conceived, we were aware that the story was more multiplex friendly and therefore, the casting, as also the decision to make it a U/A film was taken recognizing that we would need to reinvent the Murder brand to resonate with women and multiplex audiences. It is therefore gratifying to see that Murder 3 has resonated with women and multiplex audiences just the way we had hoped for. Our heartiest congratulations to Vishesh Bhatt and to Vishesh Films."

When asked if the collections could have been better had the film starred Emraan Hashmi instead of Randeep Hooda, and whether Emraan refused the film or was he genuinely too busy? Mr. Singh said, "No doubt the B.O. would have been bigger if Emi was the lead protagonist as Emraan is a much bigger star. However, casting is a director's call and we are happy with Vishesh's decision to cast Randeep Hooda. In fact, Murder 3 has turned out to be Randeep's career best opening as a solo lead. And importantly because the Cost of Production of the film was lower, we & Vishesh films will once again see a good R.O.I., like we did on Jannat 2 & Raaz 3."