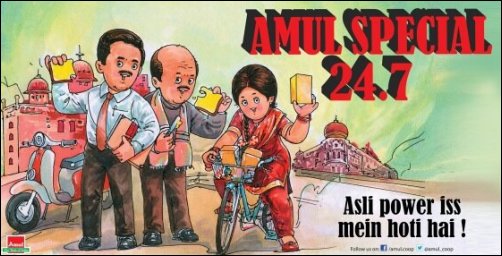 The one film that's really become the talk of the town ever since it released couple of weeks ago is Special 26. Starring Akshay Kumar, Kajal Aggarwal, Anupam Kher, Manoj Bajpayee and Jimmy Sheirgill, this gritty film directed by Neeraj Pandey has won both critical and commercial acclaim.

No wonder then that Amul decided to create a hoarding around the film stating 'Amul Special 24.7' with an interesting tagline that says 'Asli Power Iss Mein Hoti Hai!'