Halsey is not only known for her musical work but also for her bold fashion statements. Since she announced her pregnancy, she has sharing pregnancy photos every chance she gets. A few days ago, she created a buzz on social media as she posted her new album cover ‘If I Can’t Have Love, I Want Power’ in which her breast was visible, signifying the beauty and power of a woman and importance of breast feeding. 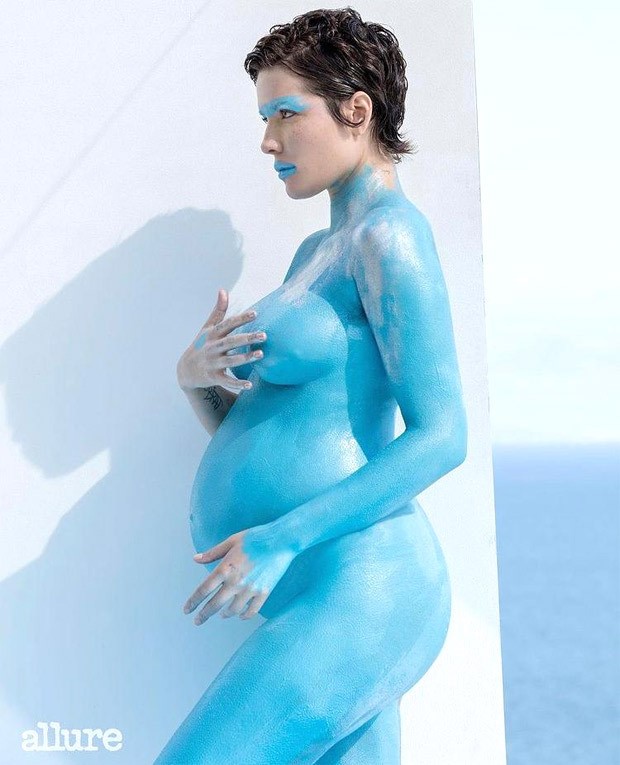 She created a buzz again as her Allure magazine cover in an unusual but beautiful way. The first look has her body covered in blue-colored paint; her eyebrows and lips were also painted in blue color. She showed off her divinely beautiful belly and gave a fierce look. This look is being appreciated all over social media.

In her main cover look, she wore a chainmail dress, which we don’t often see worn in pregnancy shoots. She flawlessly pulled the dress off. The dress was intricately designed as it had a handshape as her neckline, making us believe as if those hands are holding her breast. She wore her mullet hairstyle and dark beige lipstick.

In her third look, she wore a voluminous metallic jacket which made a bold statement for sure. She paired that with fishnet stockings. She wore a big gold necklace and big golden rings. She completed the look with minimal makeup highlighting her pink eye makeup.

In the magazine interview, she talks about her being bi-racial and how people write off her Black lineage. "A lot of people try to write off a lot of my experiences because I present white," she said. "No matter how many tears I've shed because I'm not connecting with my family or my culture in a way that I would like to ... none of that would compare to the tears that I would shed for presenting phenotypically Black and the disadvantages and the violence that I would face because of that."

The singer also talked about being comfortable with who she is and using pronouns ‘she’ and ‘they’. "I'd be staring at the ceiling, going, 'What does this mean?'" she added. "I don’t spend that time questioning or wondering anymore. The whole thing to remember about pronouns and identities is that they're not meant for other people. They're meant for you to help better understand yourself."

On the work front, Halsey is set to release the visual film for her upcoming album If I Can’t Have Love, I Want Power on August 3, 2021.