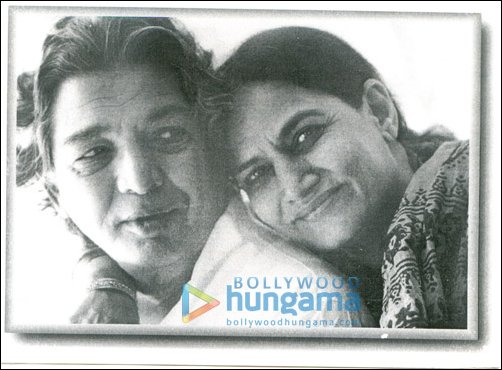 "Today, May 10, will be ten years since Kaifi Saab left us. Just thinking about Kaifi Saab makes me teary-eyed. It will take us all day and then the night to talk about him. I don't have enough words to talk of all my husband's virtues. It's hard to believe that any human being could be so incredibly goodhearted and patient. In the 55 years that I was with him, he never got angry about anything. He didn't raise his voice even once at me. I'd get angry at him but not the other way around. I find it hard to believe that a man so noble existed. He gave me whatever I desired four times over. At a time when women didn't step out of their homes, I went out and on stage to do theatre plays. He encouraged me to go out and act. And though he hated my role in Mira Nair's Salaam Bombay (I played a Madame in a brothel) he never stopped me. Although it was beyond his will-power to restrain himself from seeing me in such a role, not once did he tell me not to do it. He never stopped me from anything. He always encouraged me in my interests. Though we went through early years of poverty we enjoyed those times together. â€¦He did all he could to bring reforms in his native village Mijwan. Now my daughter Shabana continues his good work. She will push her way anywhere and ask for anything for her father's village."

"Did he ever write poetry for me? Yes, he wrote these lines for me: shaguftagi ka, latafat ka, shahkaar ho tum fakat bahar nahi, haasil-e-bahar ho tumâ€¦It was 55 years of blissful togetherness for us. My advice to today's couples: if your spouse is angry, don't fight back. Don't react. Just remain silent and smileâ€¦Maine gussa zaroor kiya kabhi kabhi, lekin mere shauhar ne kabhi nahin gussa kiyaâ€¦I've lived for ten years without my husband. I've never encountered a man of his caliber. And I'm not saying this because he's my husband. God never created another man like him. I see shades of Kaifi Saab in my son-in-law Javed Akhtar. I've seen Shabana snapping at him. He just smiles, recites some poetry and her anger evaporates. My daughter looked for a man who reminded her of her father. As for Kaifi Saab's lyrics, they remain alive to this day. I've stopped watching Hindi films for a very long time now. There is no poetry left in our films. On his death anniversary, I'll remember my husband by reading out his lines."
Tags : Javed Akhtar, Kaifi Azmi, Mira Nair, Salaam Bombay, Shabana Azmi, Shaukat Azmi