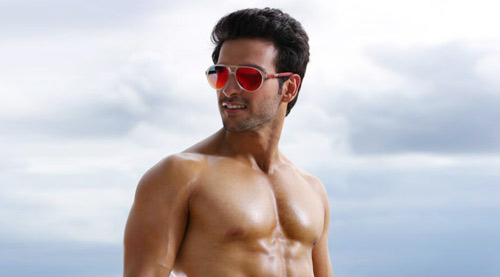 Loveshhuda. Since the film is an urban youth musical entertainer, he had to make sure to bring his best foot forward. Pun intended.

"The makers of Loveshhuda were sure that other than a romantic number ('Mar Jaayen'), Loveshhuda had to be boosted further by as many as four dance numbers. The stage and setting of these tracks vary from being club outings to traditional. Girish knew that he had to get it right for each of these songs. He requested his director Vaibhav Misra and choreographers Bosco-Caesar to keep time aside for him where he could get rehearse and get his moves perfectly right before the camera started rolling," informs an insider.

Result? Girish gave his all to practice for hours at stretch for his dance numbers 'Peene Ki Tamanna' and 'Total Talli', before hitting the sets in London. However, as luck would have it, he had to restart the entire process, and this time in bare limited time available to him, since his director Vaibhav Misra felt that the moves designed by choreographers Bosco-Caesar were not entirely in synch with the situation.

"The moves were impressive for sure; in fact they could make anyone groove along with the sheer rhythm that Bosco-Caesar brought for stage. However, Vaibhav felt that the song and the characterization warranted something altogether different for screen. He complimented the choreographers for what they had done, while also adding that now they had to think something different really fast, as there was practically no time left for the shoot to kick-start in London," the insider adds.

There were a few nervous moments for sure, considering the fact that audience today is pretty demanding when it comes to a leading actor making a smashing impact on screen. Girish knew that he had to go over and above the good looks and attitude and though he had practiced hard for his dance numbers, he had to re-do the entire exercise, as required by his director.

"Meanwhile, the crew reached London and Girish had just a couple of hours available for him, before he had to dance to the tune of 'Peene Ki Tamanna' and 'Total Talli'," a crew member adds, "Bosco took a flight in quick time and it was practically an effort of day in and night out that was put by everyone, before the moves were perfected by Girish. Soon enough, he announced that he was ready to face the camera."

"The results are there to be seen. While 'Peene Ki Tamanna' is already out and has turned out to be an instant chartbuster, there is more that would be seen in 'Total Talli', which has a big stage setting to it. It gives an almost concert feeling due to the large scale that it boasts of. It is one of the highlight dance numbers of the film and has been saved for the end. Each of these dance numbers resulted in Girish slogging it out right through the making of the film," the insider adds.

When contacted, Girish shyly admitted, "Well, I am glad my choreographers and director put together something so remarkable for me. When I look back, it wouldn't have been possible, had not been for my team that came together to support me. Hope the effort pays off and audiences like the final results too."